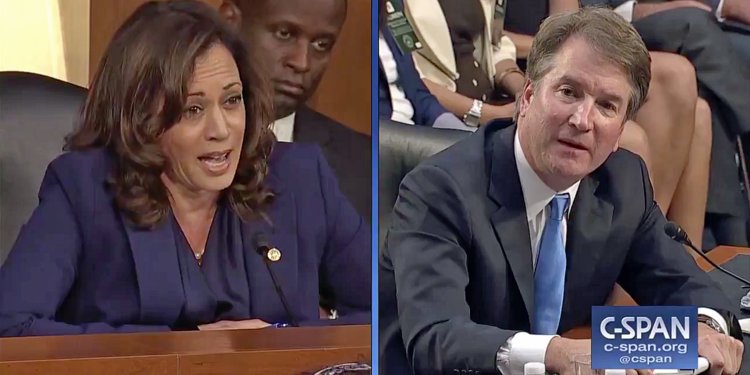 Women deserve to be believ–

Senate Judiciary Committee Chairman Chuck Grassley on Friday referred a woman who’d accused Supreme Court Justice Brett Kavanaugh of raping her “several times” in the backseat of a car to the Justice Department for “materially false statements” and “obstruction.”

Kavanaugh, confirmed to the high court on Oct. 6, was infamously accused by multiple women of sexual assault and misconduct before the confirmation.

Judy Munro-Leighton, according to Grassley’s office, “alleged that Justice Kavanaugh and a friend had raped her ‘several times each’ in the backseat of a car.”

Those accusations were made via a “Jane Doe” letter provided to Sen. Kamala Harris, a California Democrat and committee member, Grassley’s office wrote.

NEW: Another Kavanaugh accuser has been referred to law enforcement after admitting the graphic accusations she made to the committee were “a ploy,” done “for attention,” noting she’s never even met Brett Kavanaugh. https://t.co/D398Ucv7iA pic.twitter.com/u8JHY46GTG

Upon further investigation, however, inconsistencies in the story emerged.

“Given her relatively unique name, Committee investigators were able to use open-source research to locate Ms. Munro-Leighton and determine that she: (1) is a left-wing activist; (2) is decades older than Judge Kavanaugh; and (3) lives in neither the Washington DC area nor California, but in Kentucky,” Grassley’s office wrote.

This is pure misogyny.

She’s a teacher, a mother, a daughter. She’s well educated. She has credibility. Just because something happens a long time ago because a rape victim doesn’t want to personally come forward does not mean something can’t be true! She deserves to be believed!

“Under questioning by Committee investigators, Ms. Munro-Leighton admitted, contrary to her prior claims, that she had not been sexually assaulted by … Kavanaugh and was not the author of the original ‘Jane Doe’ letter,” Grassley’s office wrote in a Friday referral to the DOJ.

“When directly asked by Committee investigators if she was, as she had claimed, the ‘Jane Doe’ from Oceanside California who had sent the letter to Senator Harris, she admitted: ‘No, no, no. I did that as a way to grab attention. I am not Jane Doe . . . but I did read Jane Doe’s letter. I read the transcript of the call to your Committee. . . . I saw it online. It was news.”

“In short, during the Committee’s time-sensitive investigation of allegations against Judge Kavanaugh, Ms. Munro-Leighton submitted a fabricated allegation, which diverted Committee resources. When questioned by Committee investigators she admitted it was false, a ‘ploy,’ and a ‘tactic,’” Grassley’s office wrote. “She was opposed to Judge Kavanaugh’s confirmation.”

The media put out the call and she (and others) responded. Are they going to take any responsibility for inciting these false rape accusations and smearing an innocent man?