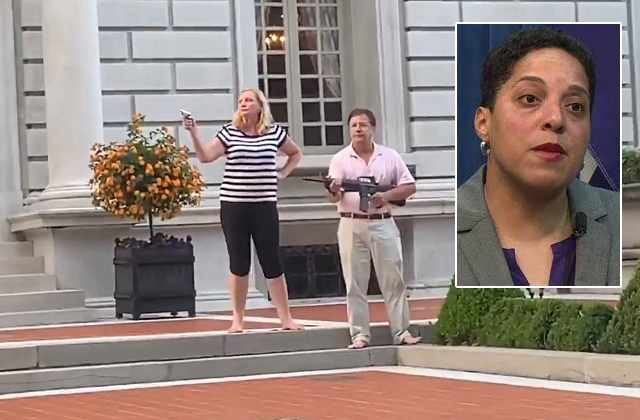 The pistol his wife used to defend their home is reportedly in the hands of their attorney, so it’s possible they’re entirely disarmed.

JUST IN: Sources tell @ksdknews that St. Louis Police executed a search warrant tonight at the home of Mark and Patricia McCloskey.

Sources say they seized the rifle he held during a confrontation with protesters in June at their Central West End home.https://t.co/22SGpoc2UW

5 On Your Side has learned St. Louis police officers executed a search warrant Friday evening at the home of Mark and Patricia McCloskey, the Central West end couple who confronted protesters with weapons in June.

Sources tell 5 On Your Side police seized one of the weapons, the rifle, from the couple and they told police their attorney has the pistol seen in photos.

5 On Your Side is not aware of any charges against the McCloskeys at this time, and the warrant served Friday evening was just for the guns.

Mr. McCloskey tells The Todd Starnes Radio Show that police seized the AR-15 he was photographed holding while an angry mob assembled on the lawn of his private home.

“We complied with the search warrant. They took my AR” he told me. “I’m absolutely surprised by this.”

He also said both he and his wife have retained criminal counsel.

Mr. McCloskey declined to answer any more questions, but I suspect they would be willing to go to jail before they back down.

Missouri Attorney General Eric Schmitt told Fox News that St. Louis Circuit Attorney Kim Gardner has an “abysmal record in prosecuting violent crime” and has been letting rioters and looters off the hook.

“Under Missouri law, under the Castle Doctrine an individual has really expansive authority to protect their own lives, their home, and their property,” Schmitt said.

“And I think the story here to watch here is the local prosecutor, Kim Gardner,” he said. “Kim Gardner has an abysmal record in prosecuting violent crime, has recently released and been complicit in the release of dozens and dozens of inmates who have been charged with violent crimes, and has a record of making politically-motivated decisions not based on the law. So, this is certainly something to watch.”

“It’s hard to get into the mind of Kim Gardner,” Schmitt said. “As I said, she has a sketchy track record of making politically based decisions.”

Gardner put out a statement claiming the BLM rioters who invaded their private neighborhood were “peaceful protesters” and they were “met by guns and a violent assault” and threatened that she will “use the full power of Missouri law to hold people accountable.” They didn't "march past," that's fake news. They marched through a gate, into private property, past a big sign that said "no trespassing."

Followers, the "just passing" narrative will be strong tomorrow. Expose it wherever you see it. https://t.co/BmuQAiCjBu pic.twitter.com/B471pmQNPK

Mark McCloskey revealed in an interview on Wednesday that he has been a “lifelong Republican” and called the Black Lives Matter movement a “terrorist organization.”

“I want to set the record straight on one thing. I’ve been reading a lot of reports about me from the media… Some of whom have accused me of being a Democrat, and I have donated money to various candidates, particularly ones who were personal friends of mine over the years, but I’ve been a lifelong Republican,” McCloskey said.

McCloskey said the St. Louis antifa group “Expect Us” on social media threatened to come “get us” and said they’re going to burn down their house.

Protesters went to their house again on July 3 but it appeared they hired either private security or had private citizens come help them defend their house.

THE MCCLOSKEY RESIDENCE IS NOW GUARDED AND BORDED UP pic.twitter.com/nth0Bz5nnZ

The future Gardner and other Soros-funded attorneys general are working to create is one where rioters, looters and thugs are allowed to roam free while law-abiding Americans are treated like criminals and prosecuted to the fullest extent of the law for defending themselves from the mob.

Hot off the press…