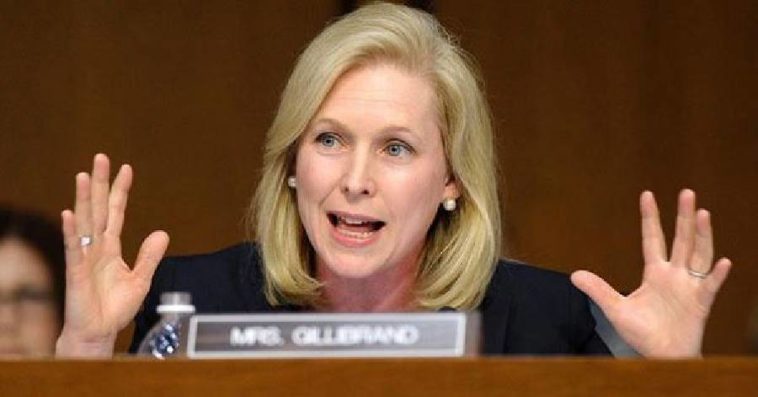 “As a party, we should be 100 percent pro-choice, and it should be nonnegotiable” –Kirsten Gillibrand at Georgia State Capitol —SOURCE

Back in May, Presidential Candidate Kirsten Gillibrand spoke some pretty bold words in Georgia. There is no room for free thinkers in the Democrat Party, every single Democrat must agree to be Pro-Choice, at least according to Gillibrand.

You have been told what to think Democrat voters, now think it. The Democrats have (d)evolved into a party of absolutes at the National level.

If you aren’t in agreement with every single platform that they push, good or bad, then you are just another “nazi” who must be extinguished.

THE BIG IDEA: Sen. Kirsten Gillibrand (D-N.Y.) held a campaign event today inside the Georgia State Capitol to protest the flurry of antiabortion bills that have been passing in red states – and unveil new campaign promises to protect Roe v. Wade.

Gillibrand – who announced last week that she would only appoint judges who will uphold Roe – vowed to turn the landmark 1973 case into a permanent law if she’s elected president.

She pledged to “make sure that every woman in America, no matter what state she lives in or how much money she has in her pocket, can have guaranteed access to safe, legal abortion.”

Gillibrand went even further: She would seek to guarantee access to the procedure in every state by requiring private insurance companies to cover abortions and creating a federal authority to oversee state restrictions on the procedure. And she wants to end the Hyde Amendment, which bars the use of federal funds including Medicaid to pay for abortions.

Medicaid doesn’t pay for abortions? Are you sure?

Because Planned Parenthood claims that most of their “federal funding” comes from Medicaid:

Most of Planned Parenthood’s federal funding is from Medicaid reimbursements for preventive care, and some is from Title X. There’s no keep-Planned-Parenthood-running part of the federal budget.

That quote is straight from the Planned Parenthood Action site.

There are four things we learn from this:

1) Democrats have become “more direct” with “less throat clearing” on the issue of abortion because the media lets the get away with their extremism by refusing to critically analyze their positions. And the reason for that is that a majority of mainstream media journalists are either pro-choice Democrats or pro-choice independents who agree with Democratic party.

2) If you’re a pro-life Democrat serving in elected office, you should be primaried, according to Gillibrand. Case in point: Rep. Dan Lipinski (D-IL-3), who is being targeted by pro-choice groups. Gillibrand has endorsed his primary opponent Marie Newman.

3) Gillibrand, like many other Democrats, refuses to acknowledge that there are a large number of women in the United States who are pro-life. Just because “more women are participating in politics” doesn’t mean it’s because more women want to see abortion remain legal.

4) The Senator has become increasingly desperate for relevance in a crowded field (she’s currently averaging less than 1% in 2020 presidential polling), and wants to be included in the first Democratic primary debates. She hasn’t quite yet met the criteria for being able to do so, so maybe she thinks moving further to the left on abortion will do the trick and bring in more supporters and much-needed donors.

Move as far left as you want Gillibrand, my hope is that the flat-earthers are right and you fall off. Still even if you don’t fall off the party may be moving forward without you. Liberal voters are growing tired of extremists.

Are you aware that the “Pro-choice” mandate seems only to be relevant to National candidates? Check this out…

Not all Democrats are part of the “dog and pony” show that goes on at the national level. National Democrats have their own agenda while state and local Dems still try to serve their constituents and still feel free to carry their own opinions on key issues. Check out this story from Louisiana:

Bucking her party’s fervently pro-choice stance on abortion at the national level, a Democratic state lawmaker in Louisiana is hailing that state’s enactment of legislation that would prohibit abortion after detection of a fetal heartbeat.

Appearing on “The Story with Martha MacCallum” Monday on the Fox News Channel, Louisiana state Rep. Katrina Jackson said a majority of Democrats in the state’s legislature are also pro-life.

The Louisiana House of Representatives on May 29 on a 79-23 vote passed SB184, which would restrict abortion once a fetal heartbeat has been detected. It was signed into law the next day by the state’s pro-life Democratic governor, John Bel Edwards.

National Democrats are pushing an agenda that is leaving their constituents behind, and hopefully that will be proven in 2020 elections.

How can someone be so vehement about the cold blooded murder of babies?

Maybe Gillibrand’s parents made a bad choice in not aborting her?

Oh wait, Gillibrand was born in 1966 and luckily for her that was before Roe v Wade. It would have been a shame if she would have been aborted and there were less people to defend the killing of America’s babies.

How hypocritical can people be?

To wish death upon those with no voice, when you were given the gift of life is certainly not Biblical and is most accurately PURE EVIL.

Who will speak for the unborn?