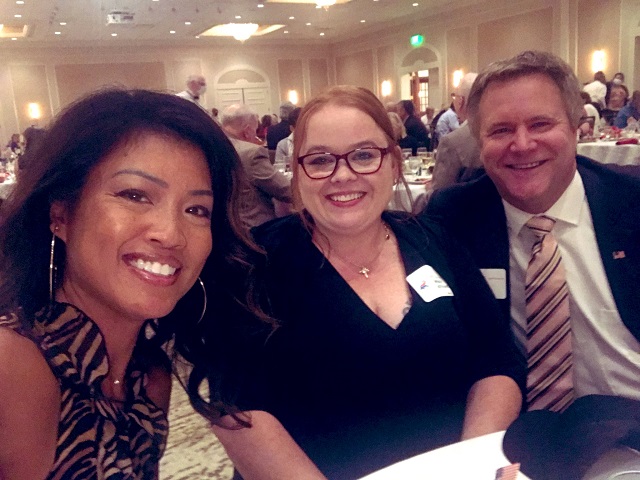 The mother of Kyle Rittenhouse, the 17-year-old charged with fatally shooting two people in Kenosha, Wisconsin, during protests following the police shooting of Jacob Blake, received a standing ovation on Thursday while attending a Wisconsin GOP event.

Wendy Rittenhouse and her son’s lawyer, John Pierce, attended a Waukesha County Republican event, and they were applauded by the crowd after being brought on stage by conservative commentator Michelle Malkin.

Standing ovation from Waukesha County GOP women for my special guests, @CaliKidJMP & Wendy Rittenhouse, Kyle’s mom. Huge shoutout sent from all of us in WI to warrior @LLinWood. I was able to talk to Kyle by phone & THANK HIM for his courage! #fightback https://t.co/uFBQrnQ0xo pic.twitter.com/qqeF8Rzery

“Standing ovation from Waukesha County GOP women for my special guests, @CaliKidJMP & Wendy Rittenhouse, Kyle’s mom,” Malkin wrote on Twitter, adding a photo of her, Rittenhouse’s mother and Pierce. “Huge shoutout sent from all of us in WI to warrior @LLinWood. I was able to talk to Kyle by phone & THANK HIM for his courage! #fightback.”

“I love and admire Michelle Malkin,” responded attorney L. Lin Wood, who organized Rittenhouse’s legal team. “Michelle is fearless. She loves freedom and our Constitution. She drives leftist-militants crazy. We need more political commentators like Michelle. She is a truth-giver.”

Kenosha County GOP Chairwoman Erin Decker said earlier this month that from talking to people around the area she believes around 80 percent of people support Kyle Rittenhouse.

“It looks like it was self-defense, and, talking to people around the area, I would say about 80 percent of the people support what Kyle did,” Decker said.

Marjorie Taylor Greene, who is running for congress in Georgia’s 14th district and very likely to win, said Wednesday that she believes Kyle Rittenhouse is innocent and acted in self-defense.

“I believe Kyle Rittenhouse is an innocent child,” Greene said. “I believe he acted in self defense against anarchist criminal thugs who were attacking him and trying to kill him. I’m fed up with the media and the left defending riots, anarchy, and insurrection. Soon I’ll be in Congress. Enough.”

It was reported on Thursday by National File that Bulgarian soccer fans unveiled a banner in support of Rittenhouse reading, “Kyle Rittenhouse Did Nothing Wrong… He Is A Hero.”

Rittenhouse made his first appearance in court on Friday along with his attorney John Pierce who announced he intends to fight his extradition to Wisconsin.

From the Chicago Tribune:

Defendants frequently waive their right to challenge extradition, but a lawyer for the 17-year-old from Antioch told Lake County Judge Paul Novak during a brief online hearing Friday morning that he plans to contest the process.

Attorney John M. Pierce did not detail the legal arguments he plans to make but said the case would involve “issues of some complexity, frankly, that have not arisen in the country for some time.”

The judge gave his legal team two weeks to make their case and moved to potentially allow them to bring a laptop into the jail where Rittenhouse is being held to so they can go over video evidence on the case together.

Rittenhouse’s legal team on Tuesday released a detailed breakdown and timeline of the Aug 25 shooting titled, “Kyle Rittenhouse – The Truth In 11 Minutes,” which quickly received over 730,000 views despite being age-restricted on YouTube.