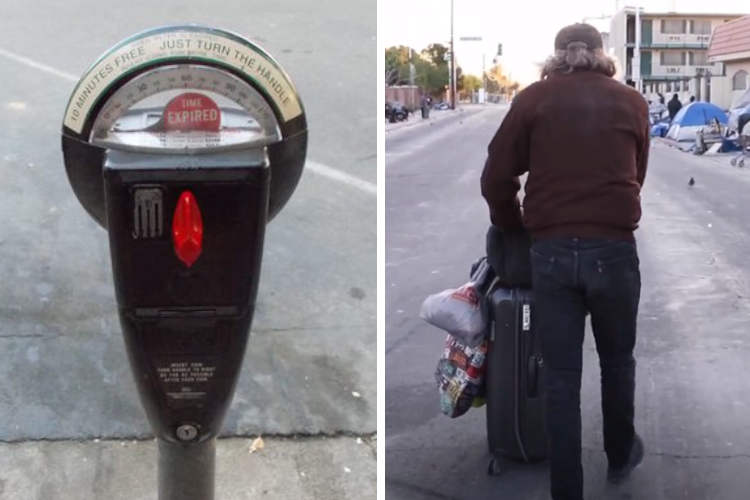 Government certainly does love to portray itself as the hero and savior of the people, and most often they do this so well that most people cannot even imagine a world without mandatory taxation, countless punitive laws, or roaming authoritative enforcement agencies watching over them.

In another case of such an attempt at public relations, earlier this year the City of Las Vegas approved a measure allowing parking tickets to be paid with school supplies. Apparently the effort to give back to the communities from which they tax was so successful at boosting the city’s image that they are doing it again, this time by allowing people to donate food in payment of parking tickets.

This new measure will apply only during the holiday season, as Fox-5 Las Vegas reports:

“The Las Vegas City Council unanimously voted in favor of allowing parking tickets issued between Oct. 16 and Nov. 16, 2019, to be paid with donations of food for those in need during the holiday season.

Those who have a non-public safety parking infraction in the city of Las Vegas that was issued between the allotted time frame may resolve their tickets by donating non-perishable food items of equal or greater value to their fine.” [Source]

Supporting local food banks and homeless shelters is certainly critical during the holiday season, but it’s important to remember that as a citizen, feeding homeless people is effectively illegal in Las Vegas and can result in hefty fines and punishment as well as ongoing legal issues.

In December of 2018, the Las Vegas Review-Jounral reported that police were actually stepping up their efforts to ticket people who might dare to feed homeless people. There are no doubt plenty of victims of actual crime in Las Vegas looking for justice, yet police had delegated an increased amount of their resources toward the victimless crime of giving away food.

“So Joey Lankowski, 32, knew the risks when he parked his white RAV4 in the red zone on Wednesday. He said he’d been handing out food to the homeless there since the summer and hadn’t had a problem.

This time was different.

Within minutes, he received a citation carrying a $200 fine for creating a traffic hazard and blocking a fire lane.

Three marshals from the city and two Metropolitan Police Department officers stood by as Lankowski pleaded with officer John Purcell to look the other way.” [Source]

In general, the homeless population int he Western United States if growing rapidly, and Las Vegas is among the US cities with the highest rates of homelessness, and we’ve seen in many cities around the US, government is willing to ignore the root causes of the homeless epidemic while simultaneously making it more difficult for people within the same community to heal each other without involving the government.

Here, a local health official chimes in on why they think its best to punish people for participating in supporting community members in need:

Metro and city representatives justify the crackdown by claiming the well-intentioned souls are creating a traffic hazard by blocking the street and encouraging the homeless to foul the area with garbage and human waste.

“We appreciate when people want to help,” said Jace Radke, a city spokesman, “but we feel there’s a better way to do that than street feeding.”

A Southern Nevada Health District official told the Review-Journal that there are serious health concerns because the free food could make somebody sick, attract varmints or even increase the risk of waste “getting into our public waterways and introducing pathogens into the community.” [Source]

Furthermore, Las Vegas just passed an ordinance making it illegal to camp or sleep on the streets if there are spaces available at local shelters, which was passed during an uproar of citizens who view the measure as a Draconian solution to a complex problem.

All of this is especially ironic and sickening when you consider the fact that Las Vegas is currently building a nearly $2 billion dollar NFL stadium which will have to be funded by forcibly taxing every individual and business in the area, whether they watch the mindless Roman circus or not.

Only Criminals Feed the Homeless

Isaac Davis is a staff writer for WakingTimes.com. He is an outspoken advocate of liberty and of a voluntary society. He is an avid reader of history and passionate about becoming self-sufficient to break free of the control matrix. Follow him on Facebook, here.

This article (Las Vegas Approves Paying for Parking Tickets with Food Donations but Feeding the Homeless is Outlawed) was originally created and published by Waking Times and is published here under a Creative Commons license with attribution to Isaac Davis and WakingTimes.com. It may be re-posted freely with proper attribution, author bio, and this copyright statement.