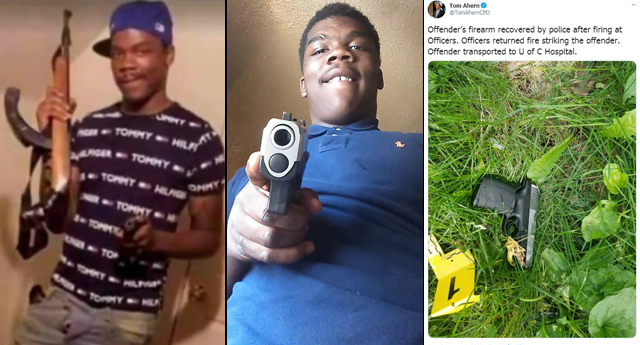 The gangbanger whose alleged shootout with police in Englewood triggered mass looting in Chicago on Sunday night has been identified as 20-year-old Latrell Allen, who was charged on Monday for attempted murder of police. Latrell Allen, 20, was arrested in the 5600 block of South Aberdeen at around 2:45 p.m. Sunday after police said he pointed a gun and fired multiple rounds at Chicago police officers.

“During the foot pursuit the offender turned and fired shots at the officers, the officers then returned discharging their weapons,” police said Sunday. Allen was transported to University of Chicago Medical Center and three officers were hospitalized for observation. No officers were shot.

Allen was charged with two counts of attempted first-degree murder and one count of possession of an unlicensed weapon. An alleged “witness” said she saw Allen “had his hands up, like why you shooting me?”

Of note, Allen’s mother confirmed her son was indeed the man seen in the picture above holding a rifle and a pistol:

As I reported earlier, Allen can be seen brandishing a Smith & Wesson Sigma in photos he shared to his own social media account, which appears to be the exact same firearm police reported they recovered at the scene.

Notice he appears to be brandishing the exact same firearm (Smith & Wesson Sigma) as the one recovered by Chicago police. https://t.co/W4KKgFROdR pic.twitter.com/IcHf5U7Uv9

Chicago Mayor Lori Lightfoot claimed Monday that a “false rumor” was spread on social media “that police officers killed a 15-year-old on Sunday.”

“Officers responded to 911 calls about an armed man in Englewood,” Lightfoot said. “A 20-year-old suspect fired at officers, gunfire was exchanged.”

“The suspect is in stable condition,” she said.

There is a false rumor on social media that police officers killed a 15-year-old on Sunday. Here are the facts:
– Officers responded to 911 calls about an armed man in Englewood
– A 20-year-old suspect fired at officers, gunfire was exchanged
– The suspect is in stable condition

I seriously question how much that had to do with the mass looting as there were rather widespread reports on social media as the rioting first broke out (it lasted some 5 hours) saying a man in his “late teens or early 20s” was shot after getting in a shootout with police.

How does this fit with the media's narrative that black people are "terrified" that police will shoot them at any moment for any reason without the slightest provocation? #ChicagoRiots pic.twitter.com/jOyPcHahXu

Look at the mortal terror on these oppressed youths faces as they drive an Audi sedan through an upscale storefront in Chicago.

Are they "cheering" because they can now "loot" the shop or crying out in pain due to white supremacy and systemic racism???https://t.co/1rbjSftOqL

Would this looting and rioting somehow be justified if police had shot a 15-year-old boy?

It was reported last month that children as young as age 10 are taking part in nearly non-stop carjackings in Chicago’s South Side.

"Police published a community alert Sunday evening warning of 14 other carjackings tied to the children."

"According to the alert, the children are committing the carjackings at a greater frequency."https://t.co/xPI8OhnbJ5

BLM Chicago issued a statement on Monday afternoon (many hours after police had already reported the suspect was a 20-year-old male who shot a gun at them) calling for police to be “abolished” because “racist armed police” shot a “young person” as he “ran away, rightfully fearing for his safety.”

“The [police] chase culminated in CPD shooting that young person, creating violence out of a situation where no one was in danger,” BLM Chicago said.

BLM Chicago Leader on the looting of stores: "That is reparations…. anything they want to take, take it because these businesses have insurance…" pic.twitter.com/uB9GAGmkLu

On Monday, BLM Chicago held a “solidarity rally” for those arrested for “looting” (scare quotes theirs) on Sunday night where they held up a giant banner saying, “Our futures have been looted from us… LOOT BACK.”

Chi Resists protesters were heard saying, “The only good cop is a dead cop.”

Though Chicago reportedly raised all the bridges except one into the city early Monday morning to prevent access into downtown there were more reports of smaller-scale looting on Monday night.

All bridges up in Chicago to prevent access to downtown. @cbschicago pic.twitter.com/KutdT8Nbc6

All bridges heading into downtown except for Lasalle are up. State Police checking ID’s again to get access downtown on expressways. Streets and San trucks blocking many roads. CPD confirming looting is still “not contained.” pic.twitter.com/GYKiEgx86z

YouTuber MrRomaniaUSA took a tour of downtown on Monday night to document the widespread looting and destruction.

As we saw with the last round of BLM/Antifa riots in Minneapolis, Milwaukee, The Bronx, Chicago and so on, the media is just going to ignore the devastation and act like it never happened.