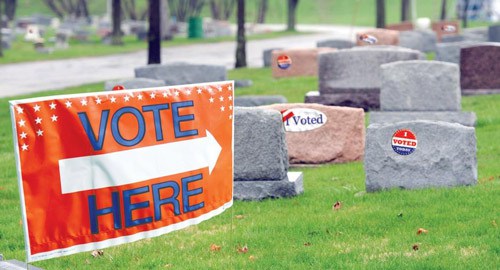 Ever notice how dead people always tend to vote Democrat?

Democrats seem more in tune with the needs of the deceased.

A public interest group has sued the city of Detroit in federal court, claiming it has thousands of dead people on its voter lists and even more duplicate names of registered voters — problems the group fears could lead to voter fraud in the upcoming presidential election.

The lawsuit, however, does not claim that someone living ever actually tried to vote as a deceased voter in Detroit. Nor does it allege that any voter fraud has actually occurred in Detroit, a majority-black Democratic stronghold that played pivotal roles in the last two elections, one way or another, and is expected to do so again in 2020.

The lawsuit cites the 2016 election, but it raises no issues of actual fraud. Rather, it claims that the city isn’t properly cleaning its voter registration records, as required by law, but instead allows the rolls to be replete with typos, dead people, duplicate registrations and mistakes about gender and birth: One Detroit voter is listed as being born in 1823 —14 years before Michigan was annexed into the Union.

The lawsuit was filed by the Indianapolis-based Public Interest Legal Foundation, which calls itself a nonpartisan group but is known for championing conservative causes, filing voter-fraud lawsuits and promoting purges that critics say would remove eligible voters from the rolls. In 2017, the group published a report called “Alien Invasion,” claiming 5,000-plus noncitizens were registered to vote in Virginia, and that about 1,800 of them had cast ballots at some point. Virginia election officials, voters and academic experts disputed the findings.

The group’s president is Christian Adams, a member of President Donald Trump’s election integrity commission who has spent years fighting to clean up voter rolls in what critics and election officials have said harms minority communities.

According to his group’s lawsuit, here are some of the alleged mistakes found on Detroit’s voter rolls, as flagged by the Public Interest Legal Foundation:

The City of Detroit is failing to perform some of the most basic functions owed to its citizenry. The city government’s nonchalant attitude toward addressing evidence of dead and duplicate registrations exposes yet another vulnerability in our voting systems as our nation works to improve election security before November 2020. Making a federal case out of this was necessary, and I hope we can achieve a resolution before the polls open.

Michigan GOP Chairwoman Laura Cox said in a statement that the lawsuit seems to have shed light on fraud and incompetence taking place in Detroit:

When thousands of dead people are registered to vote and there are more people registered than are eligible to vote in the city of Detroit either someone is trying to commit fraud or there is gross incompetence within the Detroit city clerk’s office.

The lawsuit was filed in the U.S. District Court for the Eastern District of Michigan. The case number is 2:19-cv-13638.

I wonder how many living people actually vote for Democrats, after you deduct the cheats?

What I would like to see is a statistical study on how many dead Democrats vote as contrasted with the live ones.

It is all a sham America.

There are not nearly as many Democrat voters as they claim.

It is all smoke and mirrors, and I’m not talking about Obama’s cocaine habits.

The Dems are very firm believers in the old saying, “If you ain’t cheatin’, you ain’t tryin’.”