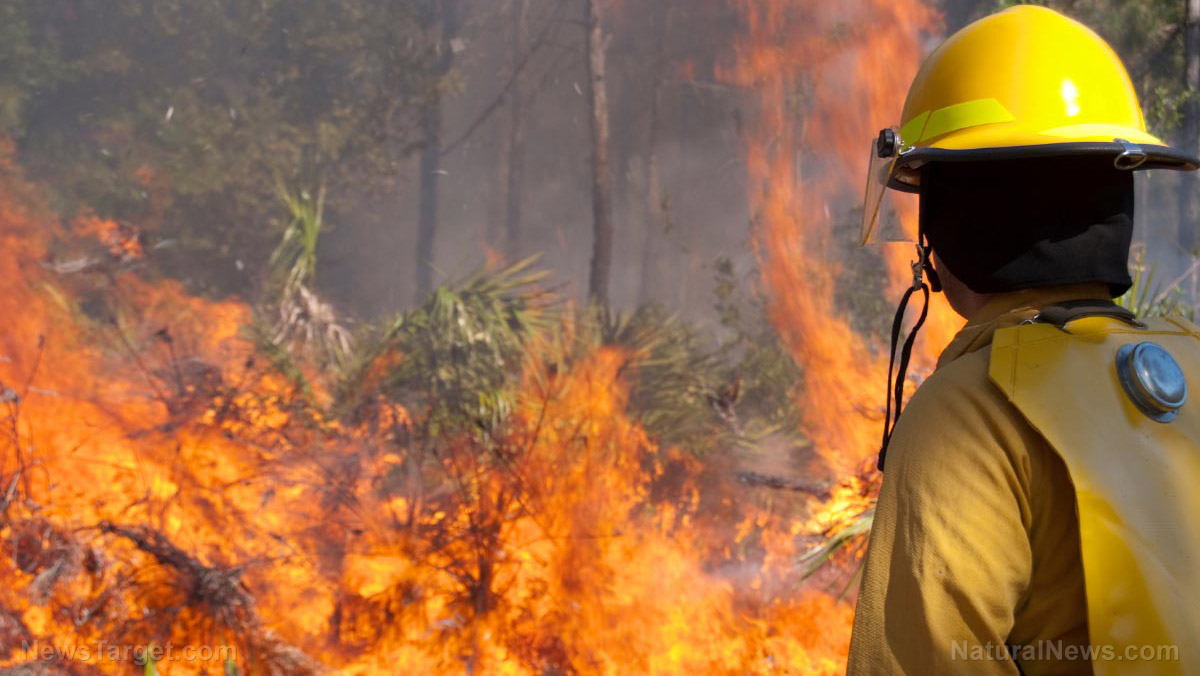 (Natural News) It’s now abundantly clear that left-wing arsonists are setting many of the wildfires that are exploding across Western states. Naturally, Oregon fire officials have now “officially” denied the fires are being set by human beings, instead claiming all the fires are Trump’s fault because of “climate change.”

It’s clear now that in their desperate effort to tear down America, the radical Left has embraced a “scorched Earth” policy that involves literally attempting to burn down the nation by setting fires. Already, Black Lives Matter terrorists are being arrested and charged after being caught setting fires.

The wildfires in Oregon have now displaced half a million residents there, and federal officials are investigating “mass arson” as the real cause behind these fires.

One map of real-time fires shows that all the fires magically stop at the U.S. / Canada border, revealing how these aren’t natural fires but rather acts of arson being waged as wartime sabotage against the United States of America:

In addition, videos are already surfacing that reveal how the fires are “engineered” as weapons against America.

“Men with chain saws are cutting down telephone poles to set fires…” see this video for more:

We know that left-wing terrorists are now resorting to arson to set many of these fires, but the question remains: Why?

The best current theory reveals they are carried out as a kind of “grey terrorism” — acts of sabotage that aren’t overtly attributed to any particular group but are surreptitiously carried out by politically motivated groups with specific agendas. The FBI, a treasonous cabal that’s part of the illegal insurrection against America, is already confirming this is true by officially denying it, claiming anyone who says the fires are being intentionally set by human beings as a “conspiracy theorist.” (The FBI, if you recall, is the same discredited agency that claimed the Russians stole the 2016 election…)

If it’s a conspiracy theory, then why did this man in Oregon manage to catch arsonists in the act of setting fires in a forest?

It’s also no coincidence that these fires are appearing in the same state — Oregon — where left-wing arsonists have spent the last 100 days trying to burn down federal buildings while torching police vehicles and apartment buildings.

Burning things down is what these lunatics do. As I’ve warned multiple times, these lunatics cannot be reasoned with, reformed or brought up to any level of civility that might make them compatible with civil society.

At some point, you just have to clean ’em out, or you’ll never have the rule of law functioning in society ever again. Will the cleanup effort begin the day after the election?

In my analysis published earlier today, it seems that President Trump is strategically positioning US military troops across the country, ready to be activated to put down the post-election insurrection / rebellion by invoking the Insurrection Act.

Read my full analysis of this strategic military deployment in this Natural News article.

And pray for America, because left-wing tyrants, terrorists and psychopaths are now screaming, “Death to America!” and “Kill the cops!” as they rampage across left-wing cities and states, destroying everything in sight.

For America to have a future, the domestic terrorists who are trying to destroy it will have to be permanently put down. That day is coming.

See PrepWithMike.com for a unique collection of my videos and podcasts that teach preparedness firearms, survival skills and self-defense.