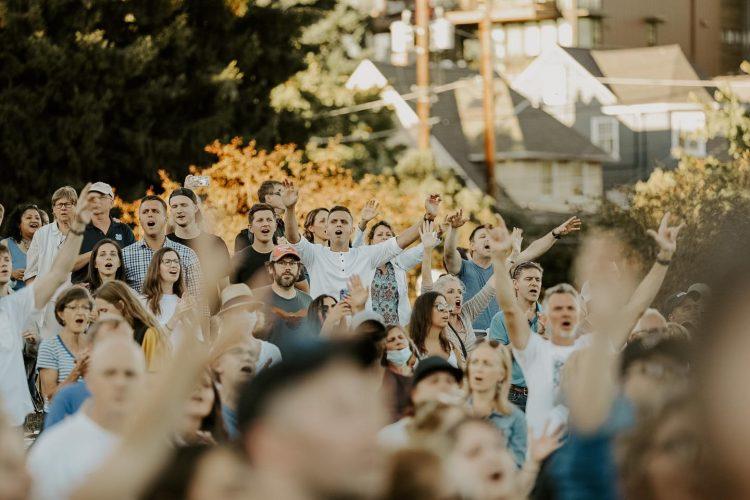 Editor’s Note: Videos are slow loading, you might go take a short break while they load. It could be just my computer/connection today. LOL

A movement has been sparked in protest of the tyranny against those who worship Jesus the Christ, and the man behind it is Sean Feucht. Over the past few nights, he and his team have been leading outdoor worship services in places like Portland, Oregon and Seattle, Washington and seeing thousands of people in attendance, as well as many making public professions of faith, including being baptized on the spot.

Feucht appeared on FOX News to talk about the “good news” he has to share. Take a listen.

While I don’t quite know his message yet, and whether or not he is actually calling people to repentance from sin, he is going out in defiance of many tyrannical orders and calling people to Christ. He’s also following through by seeing many be baptized, as commanded in Matthew 28:19-20.

Feucht says that the theme he presents if “From Riots To Revival.”

In a Facebook post from Seattle, Feucht wrote, “Worshipping through the chaos, confusion and attacks of last night in the area formerly known as CHOP released such courage across America and the world. Seattle: You stiffened our SPINES!!!! My phone is blowing up all morning from this testimony going VIRAL and the Middle Eastern church is even proud!

“The time for courageous Christianity is here,” he added. “No more backing down and fleeing for the suburbs. Jesus is coming for the hardest parts of our cities and He’s jealous for praise, love & salvation to fill the streets. These are REVIVAL DAYS my friends!!!! So many were saved, healed and delivered last night! We can’t stop now!”

Of course, those in attendance had their hecklers, but that only encouraged them to sing louder and even the heckler took notice!

Knife-wielding Satanists even showed up in Seattle, but it didn’t discourage nor intimidate those worshippingl.

Talk about no weapon formed against your shall prosper!

This is where the Church is supposed to be: The light in the midst of the darkness!

Again, I would like more on the message being proclaimed, as I’m well aware of those who take a Jesus to people without a command to leave their sin, but I am encouraged that this man and his team are fearless in the face of opposition, not cowards in the least! The fact that they are facing opposition and persecution is a testimony that they are doing something right.