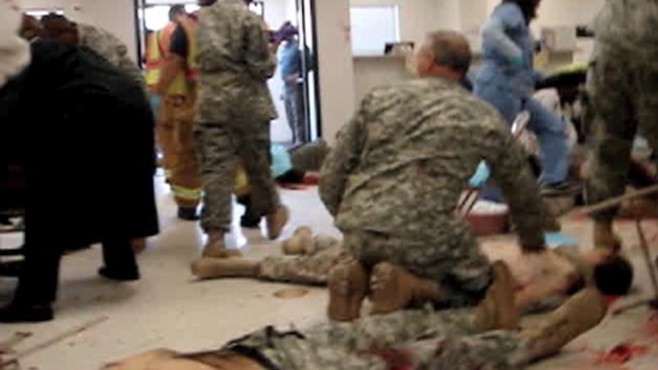 FROM EL PASO TO FORT HOOD

When the FBI failed to prevent a mass murder they knew was coming.

LAST WEEKEND, PATRICK CRUSIUS SHOT DOWN 22 VICTIMS IN EL PASO, TEXAS. TEN YEARS EARLIER IN FORT HOOD, TEXAS, SOME 500 MILES TO THE EAST, U.S. ARMY MAJOR NIDAL HASAN WAS PLANNING A DEADLY ATTACK, SIMILAR IN SOME WAYS BUT DECIDEDLY DIFFERENT IN RESPONSE FROM THE MEDIA AND POLITICAL ESTABLISHMENTS. UNLIKE THE EL PASO SHOOTER, THE FEDERAL BUREAU OF INVESTIGATION, THEN HEADED BY ROBERT MUELLER, WAS ON TO HASAN FROM THE START.

On May 31, 2009, the Muslim army psychiatrist, a self-described “soldier of Allah,” contacted terrorist mastermind Anwar al-Awliki, probing whether it was okay to kill American soldiers by suicide bombings and such in order to help fellow Muslim combatants. “This logic seems to make sense to me,” Hasan replied. These and other emails between the two were in the hands of the FBI at that time.

In June of 2009, the FBI’s Washington field office responded “WFO does not currently assess Hasan to be involved in terrorist activities.” The FBI promptly dropped the case until November 5, when field agents said: “You know who that is. That’s our boy.”

As it emerged in the 2012 congressional hearings on Lessons from Fort Hood: Improving our Ability to Connect the Dots, their boy Nidal Hasan, “walked into the Soldier Readiness Center at Fort Hood, Texas, and shouted the classic jihadist term ‘Allahu Akbar’ and opened fire on unarmed soldiers and civilians. He killed 13 and wounded 42 others. This was the most horrific terrorist attack on U.S. soil since 9/11.” That was accurate, but did not capture the details.

Using privately purchased handguns, Major Hasan chased down wounded soldiers and shot them in the back. He gunned down Pvt. Francheska Velez, pregnant with her first child. He would have killed more unarmed American soldiers if civilian police officer Kim Munley had not wounded Hasan after taking three bullets from the shooter. His victims included Hispanics and African Americans but the commander in chief of U.S. armed forces did not call Hasan a racist or the attack a hate crime.

President Barack Obama, the Democrat formerly known as Barry Soetoro, did not call Nidal Hassan’s mass murder an act of terrorism or even gun violence. He called it “workplace violence,” which did more than downplay the Islamic terrorism on display in the mass murder. Since it was “workplace” and not combat, it also prevented the victims from getting medals and the medical treatment they deserved. The president also declined to receive victims at the White House and field their complaints.

One of the victims, Sgt. Alonzo Lunsford, noted that Hasan got better medical treatment than he did, while the shooter continued to draw his pay. At the time, it did not emerge that the FBI had dropped the ball on Hasan and did nothing to stop him. The policies of POTUS 44, who refused to link Islam and terrorism, had enabled Hasan to complete his deadly mission.

As the 2012 hearings revealed, during his medical residency Hasan demonstrated “evidence of violent extremism,” sympathy for radical Islam, and even wrote papers defending Osama bin Laden. “Yet no action was taken. Instead, Major Hasan was rewarded for his work and promoted.” In reality, “Hasan was barely a competent psychiatrist, whose radical views alarmed his colleagues.”

So the Army and FBI looked the other way when the terrorist committed mass murder at Fort Hood, Texas. Those who find this disturbing might jump ahead to 2019 in El Paso, Texas.

Imagine if, under President Trump, the FBI had full knowledge of Patrick Crusius’ plans to gun down innocents, yet did nothing to stop him from killing 22 people. Imagine if President Trump declined to call this an example of evil, mass murder, a hate crime, or even gun violence, and instead said it was “workplace violence” or some equivalent.

Imagine the outcry if President Trump had made such an absurd designation to prevent victims from getting the medical treatment they needed, and declined to meet with the wounded. And consider the response if President Trump took no action against those who knew of Crusius’ plans yet did not thing to stop him.

By all indications, the FBI bosses who failed to take action against Nidal Hasan have never been named. It remains uncertain if any action was taken against them, and whether any still work for the FBI in any capacity. The dynamic was different in those days.

The political and media establishments blamed President Obama for nothing. They now blame President Trump for everything, including the attacks in El Paso and Dayton. Like the “workplace violence” designation, this is fathomless absurdity for the ages.

Authorities in El Paso plan to seek the death penalty for Patrick Cruisius, and in Texas, death sentences tend to be carried out. By contrast, Nidal Hasan was sentenced to death in 2013. He remains an unrepentant soldier of Allah and in prison expressed a desire to join ISIS.

November 5 will mark ten years since this terrorist murdered 13 Americans. As President Trump likes to say, we’ll see what happens.