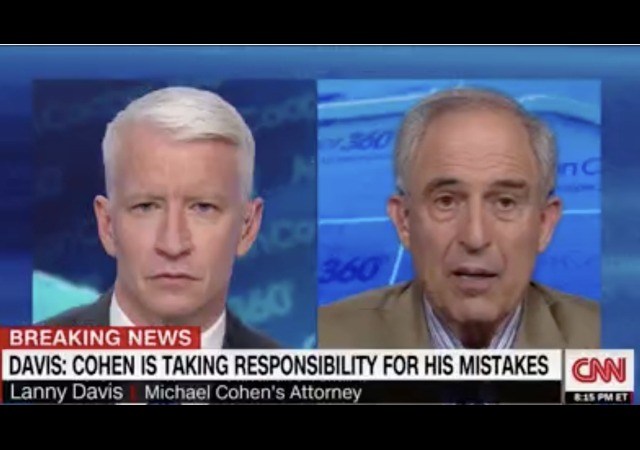 This post was originally published at Fellowship of the Minds

Liars gonna lie. And CNN will have their backs.

From MSN: Lanny Davis, the high-powered attorney of President Trump’s longtime “fixer”-turned-foe Michael Cohen, admitted Monday he was an anonymous source for a bombshell CNN story on the infamous 2016 Trump Tower meeting — after The Washington Postouted him as a source for its own story.

“I made a mistake,” Davis told BuzzFeed.

CNN, which has stood by its reporting, did not immediately respond to Fox News’ request for comment.

Davis spent recent days walking back his bombshell assertions that his client could tell Special Counsel Robert Mueller that Trump had prior knowledge of the meeting with a Russian lawyer discussing potentially damaging information on Hillary Clinton.

Trump has denied knowledge all along, and fired back following CNN’s report last month.

“I did NOT know of the meeting with my son, Don jr. Sounds to me like someone is trying to make up stories in order to get himself out of an unrelated jam (Taxi cabs maybe?). He even retained Bill and Crooked Hillary’s lawyer. Gee, I wonder if they helped him make the choice!” Trump tweeted on July 27.

Among them was The Washington Post. On Sunday, the newspaper published an interview in which Davis backpedaled.

Davis, attempting to clean up his comments in interviews last week after Cohen pleaded guilty to campaign finance violations, tax evasion and bank fraud, told the Post he “should have been more clear” that he “could not independently confirm what happened.”

Davis said he regretted his “error.”

“Davis’s latest comments cast doubt on what Cohen may know, including about a June 2016 meeting in New York’s Trump Tower attended by Trump’s eldest son and a Russian lawyer,” the Post wrote on Sunday night.