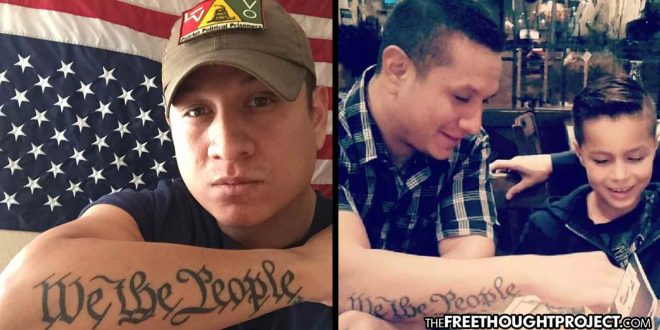 In 2017, the Free Thought Project brought you the story about constitutional activist, Josh Martinez when he was arrested for refusing to give his age to police on a Nevada courthouse steps. He was attempting to enter the Lloyd D. George Federal Courthouse, without having to identify himself. Since then, Martinez has fought a series of battles for his freedom — going up against clearly false charges — as he fights for the freedom of others.

Now, he is battling what appears to be yet another set of false charges. This time, however, the stakes appear to be much higher.

Martinez, 32, was arrested this week — and is currently being held on a $1 million bond — for Facebook posts that are entirely legal. To be clear, Martinez’s posts were in poor taste, however, they were completely legal.

Last Wednesday Martinez posted a Facebook photo of a flag-draped coffin carried by uniformed officers with the caption, “How police officers take out their trash.” Above the photo, Martinez said, “I can’t wait to see the news and hear that Detective Kenneth Mead is in that casket.”

In another post, Martinez posted a photo of Dickerson with the statement, “This is Michael Dickerson. He is Detective Kenneth Mead’s bitch. Dickerson, I hope you and Mead die a slow and painful death… Mead, I have a message for you — Molon Labe.”

Again, though this post was distasteful, it was entirely legal. One need only scroll through Twitter or Facebook for a few seconds to find millions upon millions of similar posts about Trump, Biden, cops, judges, local politicians, and individuals whose politics draw them the ire of the political foes.

According to the criminal complaint against Martinez — which apparently justified the million dollar bond — Martinez threatened Mead with the intent that Mead be “placed in reasonable fear of death or substantial bodily harm.”

The emails directly threaten our families, claiming they will murder, rape, etc. If you are reading this now, you can probably even scroll down to the comments and find a threat below. But we don’t even report them, as some pissed off asshole ranting on the internet does not justify reasonable fear.

Nevertheless, Martinez is sitting behind bars because of it. He is currently facing four felony charges — aggravated stalking, challenge to a fight with use of a deadly weapon, stalking with use of the internet or electronic communication and possession of a firearm by a prohibited person. He also faces two misdemeanor harassment charges, according to the Las Vegas Review-Journal.

Adding to the unjust nature of this case is the fact that police allege they found a shotgun in Martinez’s possession. Because of his prior questionable arrests for handing out constitutional information and exercising his rights, Martinez is not allowed to own firearms.

However, a source close to the case tells TFTP that the search warrant was executed at the home of Martinez’s father — where Martinez does not live — meaning the shotgun is likely not his.

James Freeman, a friend of Martinez expressed his opinion on what is unfolding in this case, and it is nothing short of corrupt and infuriating.

These are the charges put on Joshua Martinez for making Facebook posts that Detective Kenneth Mead with Las Vegas Metropolitan Police department didn’t like. The posts were in my personal opinion distasteful, but there was no harassment or threats. The posts were used by Joshua to express to his friends how much he dislikes Kenneth Mead, after Kenneth Mead spent years terrorizing Joshua and his family.

Kenneth Mead is part of the Anti Terrorism task force in Las Vegas. He has made ZERO PROGRESS on the Vegas shooting case, but has spent thousands of hours, and hundreds of thousands in resources terrorizing Joshua because he believes in the constitution of the US. Kenneth Mead’s violent actions against innocent civilians are terroristic.

Indeed, it is hard to argue with this.

Freeman put together a powerful video which highlights many of the unscrupulous aspects of Martinez’s case. It is below. Also below is a video made by TFTP’s Jason Bassler in January of last year, explaining the persecution of Martinez.

Courtesy of TFTP
Matt Agorist is an honorably discharged veteran of the USMC and former intelligence operator directly tasked by the NSA. This prior experience gives him unique insight into the world of government corruption and the American police state. Agorist has been an independent journalist for over a decade and has been featured on mainstream networks around the world. Agorist is also the Editor at Large at the Free Thought Project. Follow @MattAgorist on Twitter, Steemit, and now on Minds.
\
(Visited 8 times, 1 visits today)
Share
Tweet
Share
Pin