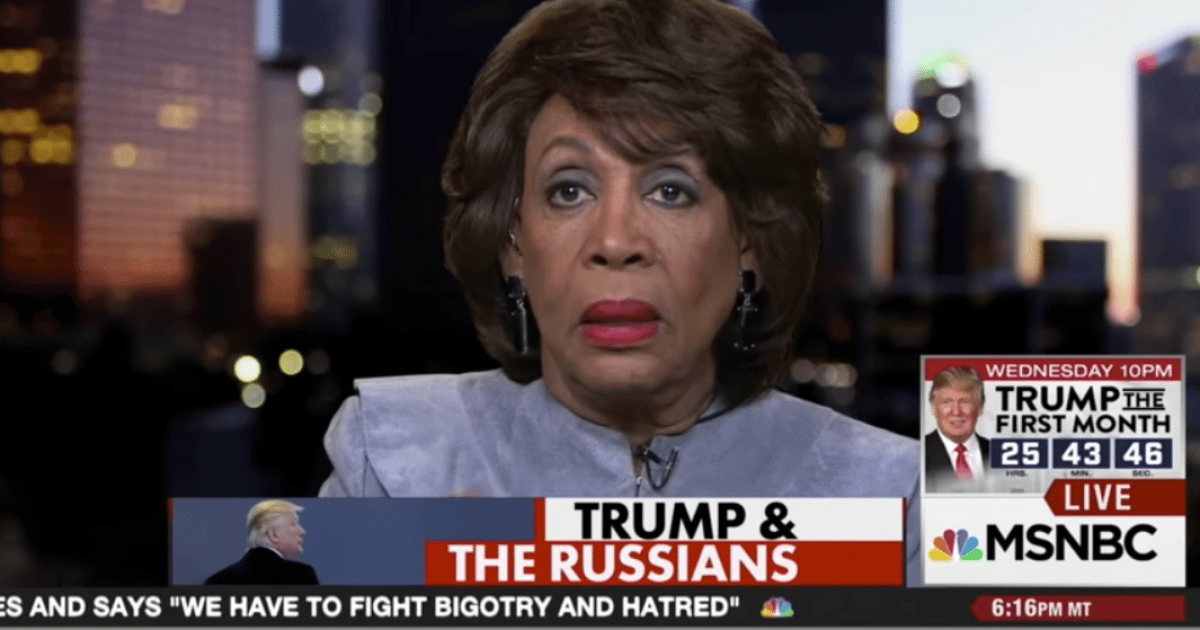 On Tuesday, Maxine Waters, the unhinged California Democrat obsessed with impeachment and conspiracy theories involving Russia, demanded on Twitter that President Trump be imprisoned and literally, “placed in solitary confinement.”

“I’m calling on the GOP to stop Trump’s filthy talk of whistleblowers being spies & using mob language implying they should be killed. Impeachment is not good enough for Trump. He needs to be imprisoned & placed in solitary confinement. But for now, impeachment is the imperative,” she said on Twitter.

I'm calling on the GOP to stop Trump's filthy talk of whistleblowers being spies & using mob language implying they should be killed. Impeachment is not good enough for Trump. He needs to be imprisoned & placed in solitary confinement. But for now, impeachment is the imperative.

Keep in mind, if you will, that the National Commission on Correctional Health Care calls prolonged solitary confinement, that is, anything more than 15 consecutive days, “cruel, inhumane, and degrading treatment, and harmful to an individual’s health.” Naturally, this is what Waters wants for Trump.

“Let me just say that Attorney General Barr has defined himself as being just the president’s lawyer, not the people’s lawyer that he’s supposed to be. [He’s] willing to do whatever it takes to protect the president. He’s not a credible human being,” she told Alex Berg, who asked if Barr should also be impeached. “His name has come up in this whole issue about the president’s call and work that’s been done with Ukraine to try to pressure them and get information about Biden. I know, given what he’s done in the past, that he’s guilty in being involved by either assisting Giuliani or doing other kinds of things to try and get Ukraine’s president to come out and get dirt on Biden.”

After questioning the patriotism of an undefined “they,” Waters floated a tinfoil hat conspiracy involving Pence.

“First of all, we have seen that no matter what the president does, they come up with a kind of messaging to defend him. No matter what it is, none of them have had the courage, the patriotism, or the guts to stand up for what is right for our country,” she said. “So I expect that Pence is part of this conspiracy to try to get Ukraine to do something in a fake investigation and come out with some dirt on Biden. I’m looking forward to that coming out in the hearings that will be done by the Judiciary Committee as they take up the impeachment resolution.”

And slowly back away from the window.

Drunk-texting will get you nowhere.

This is beyond the pale. As a Dem, I say this statement should be condemned.

We can do this without lowering ourselves into the gutter.

I expect a higher level of discourse from our party.

That’s a nice sentiment, but it’s simply not going to happen — at least not with the current crop of Democrats who seem hell-bent on pushing America to the brink of a second bloody civil war.

Keep in mind, this is the same Maxine Waters who refused to condemn violent threats to murder President Trump and violent rhetoric against his supporters.

At this point, we can’t help but wonder: How long will it be before Waters openly advocates murdering Trump?