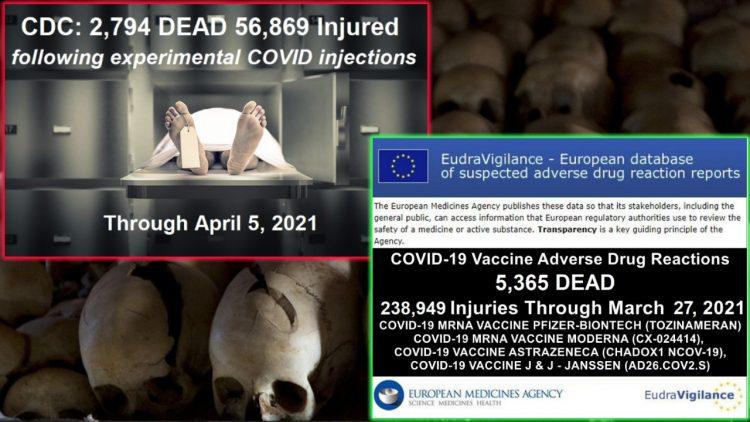 And not a word…. not a word from corrupt politicians, Big Pharma or the mainstream media. Not a word! Yet, the truth is out there for those who wish to know what is really taking place and it’s genocide on a worldwide scale. The Center for Disease Control is reporting this week that there are 2,794 deaths that were reported to VAERS (Vaccine Adverse Effects Reports System) and nearly 57,000 injured following receiving the experimental COVID injections. Additionally, the European Union’s version of VAERS reported 5,365 dead and 238,949 injuries.

This is only a small percentage of actual deaths and injuries. In fact, this number is normally only 1-5%.

In what is becoming the most censored story probably in the history of the United States, the CDC has reported this week that 2,794 deaths have been reported to VAERS as of April 5, 2021, following injections of the three experimental, non-FDA approved, COVID-19 injections.

To put this into some perspective, there were a total of 345 deaths recorded in VAERS following vaccines for all of 2020.

From 2010 through the end of 2020, an entire decade spanning 11 years, there were a total of 2,588 deaths recorded following vaccines.

So deaths following vaccines during the first three months of 2021 have now exceeded total deaths for the past 11 years.

Of course, the unconstitutional CDC poo poos the report to declare that none of these deaths can be attributed to the injection.

A review of available clinical information including death certificates, autopsy, and medical records revealed no evidence that vaccination contributed to patient deaths.

And judging by reported surveys among Americans who plan to get one of these experimental injections, more than half the population actually believes the CDC that these THOUSANDS of deaths following the injections are “coincidence” and have nothing to do with the injections.

Not only is the fact that 2,794 people have died following COVID-19 injections headline news, it is clearly CRIMINAL, as readers have told us that the network news is telling everyone that there have been no deaths related to the COVID-19 injections, and they can legally say that because they are repeating exactly what the CDC is saying.

Wake up people! The CDC is a corrupt private organization with no elected officials, and they hold numerous patents on vaccines and earn revenue from the sale of vaccines.

Besides the 2,794 deaths the CDC reported earlier this week, their data dump into the VAERS database today also reveals 56,869 injuries, including 8,975 visits to Emergency Room doctors, 941 permanent disabilities, and 4,972 hospitalizations.

Look, there is no doubt that anyone with common sense and who think logically that normal, healthy people who take this jab and then get sick or worse die, after being injected with an experiment are more than likely getting sick or dying from complications due to that injection.

A Health Impact News subscriber in Europe ran the reports for each of the four COVID-19 shots we are including here. This subscriber has volunteered to do this, and it is a lot of work to tabulate each reaction with injuries and fatalities, since there is no place on the EudraVigilance system we have found that tabulates all the results. 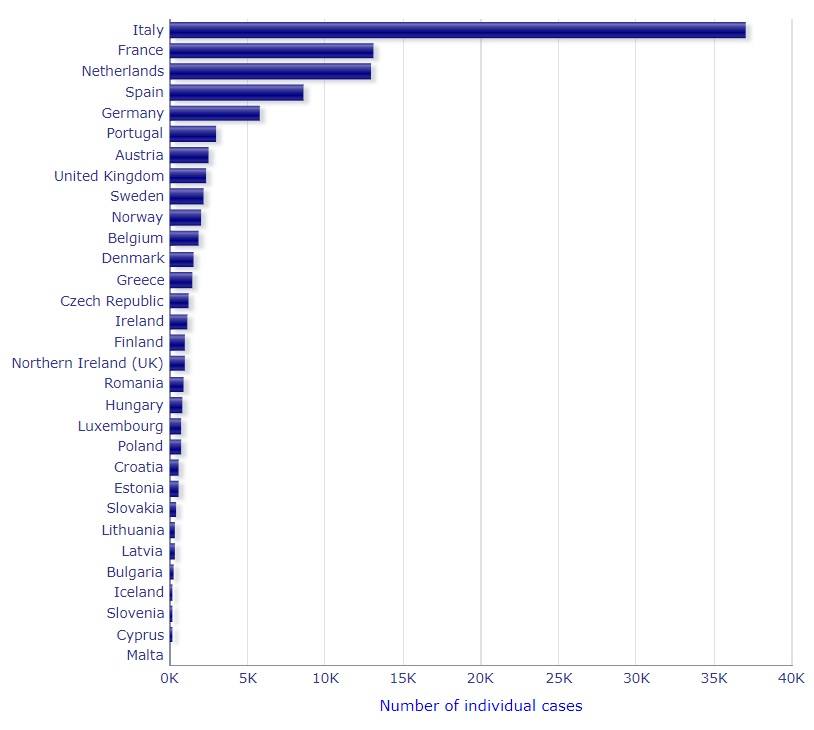 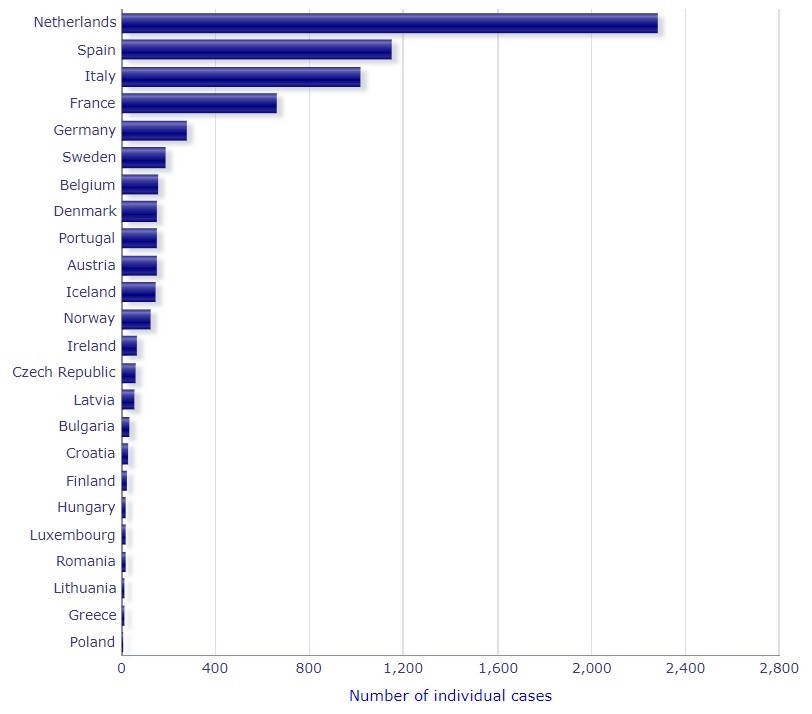 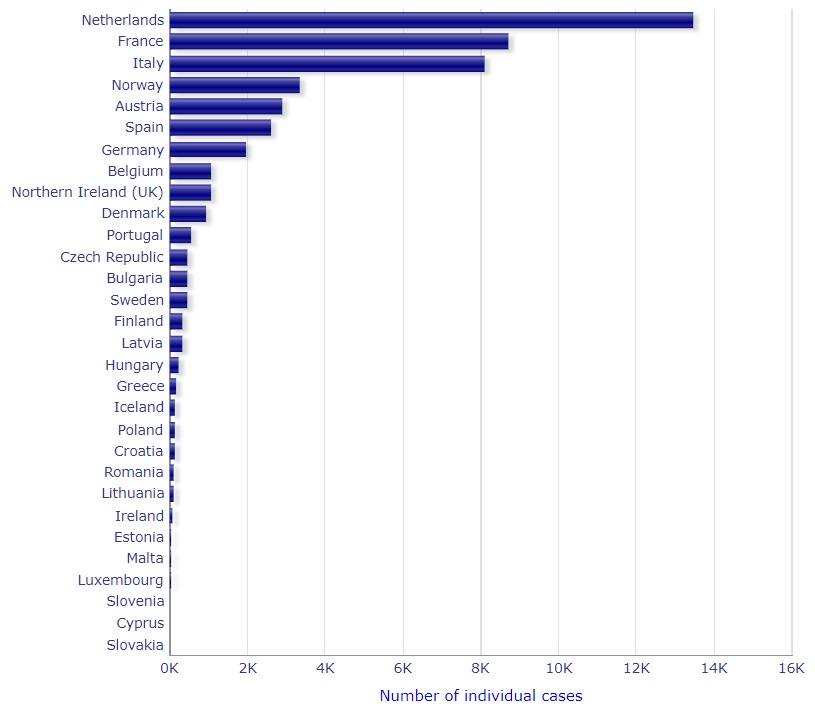 (Not enough data to produce a graph yet)

TRENDING: The Real War on Journalism is Waged by the Left

Anyone promoting these injections as “safe and effective” should be marked as a liar. Additionally, while the government has unlawfully given Big Pharma drug pimps immunity for producing these deadly agents, the media has not and so we should begin to target media outlets that promote these experimental injections as “safe and effective” for promoting fraud. We should also be doing it to the corrupt, bought and paid for Big Pharma pimps in DC who do the same thing and illegally use our money to fund the operation.

Tim Brown is an author and Editor at FreedomOutpost.com, SonsOfLibertyMedia.com, GunsInTheNews.com and TheWashingtonStandard.com. He is husband to his “more precious than rubies” wife, father of 10 “mighty arrows”, jack of all trades, Christian and lover of liberty. He resides in the U.S. occupied Great State of South Carolina. . Follow Tim on Twitter. Also check him out on Gab, Minds, MeWe, Spreely, Mumbl It and Steemit
Vi
(Visited 8 times, 1 visits today)
Share
Tweet
Share
Pin