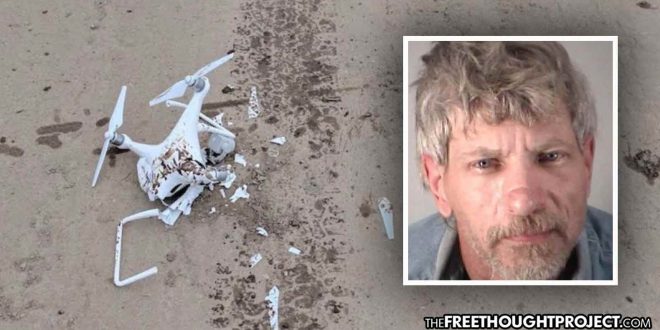 Lake County, FL — Wendell Doyle Goney, 51, a “Florida man,” is facing 30 years behind bars after he was charged this week for destruction of an aircraft. That “aircraft” was a drone and it belonged to the Lake County Sheriff’s Department.

According to the Department of Justice, the US Attorney’s Office for the Middle District of Florida indicted Goney on two counts; possession of a firearm as a convicted felon and destruction of a government aircraft. If he is convicted on both counts, he faces up to 30 years in a cage.

According to the release from the DOJ, on July 11, 2021, deputies from the Lake County Sheriff’s Office responded to a burglary at a 10-acre business property in Mount Dora. Deputies deployed a law enforcement drone to assist with the outdoor search, only to have the drone destroyed by gunfire from a neighboring property.

When police responded to the scene, they confronted Goney who had no problem admitting to them that he was the one who shot down the drone with his .22 caliber rifle.

To be fair, Goney did not know the drone belonged to the police and he claimed that it was “harassing him.” After admitting to shooting down the drone, Goney also admitted to police that he was not legally allowed to own a firearm as he is a previously convicted felon. As a convicted felon, Goney is prohibited from possessing firearms and ammunition under federal law.

Goney’s case will now move through the court as he attempts to fight his way out of spending the rest of his life in a cage for shooting down a drone.

Goney will have some previous history on his side as the idea of a police drone harassing innocent people is not far fetched. TFTP has reported on this exact thing previously. In fact, we reported on a police drone actually spying on a child in a back yard.

When Texas resident Bobbie Sanchez walked out in her backyard in April of 2017, the last thing she thought she’d see was a drone — hovering — watching her kids.

“Mommy there’s a drone over our roof,” said her children.

According to Sanchez, the drone hovered there long enough for her to take multiple photos and to call the police for help.

“They’re watching my children play in the backyard,” said Sanchez. “I called the Hurst Police Department and was pretty surprised to hear that it was them.”

The department claimed that the day they were over Sanchez’s yard, they were conducting ‘a training exercise.’ Training, in the land of the free, now involves police officers stripping citizens of their privacy and creepily watching their kids.

This is enough to enrage any parent who would have every right in the world to shoot a drone down spying on their children. A precedent was actually set in Kentucky after a man prevailed in a lawsuit he faced over shooting down a drone that entered his property.

William Meredith became known as the “drone slayer” in 2015, after he used a shotgun to dismantle a drone operated by David Boggs, that he says was flying over his property in front of him and his daughter. Meredith initially faced felony charges of endangerment and criminal mischief for shooting down the drone. The criminal charges were dismissed by Judge Rebecca Ward in Bullitt County District Court, citing recollections from witnesses who said that the drone was flying under the tree line. Ward also said that Meredith was within his rights to shoot down the drone.

According to Meredith, that drone, like the police drone in Hurst, was also watching his children.

However, we shouldn’t rely on this case to hold up against the blue privilege associated with shooting down ‘official police property’ — even if it is watching your kids in your own backyard, or harassing a Florida man.