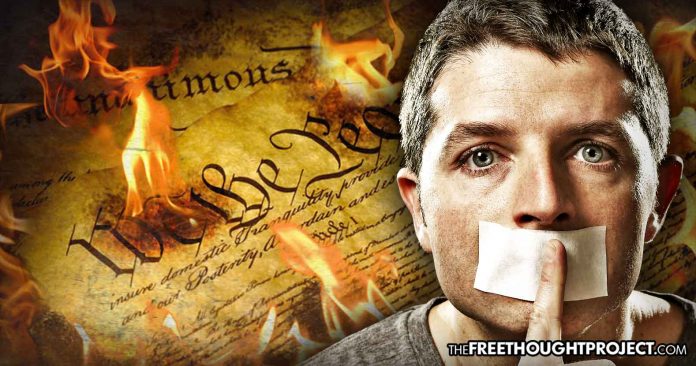 WASHINGTON, D.C. — (TRI) Warning that the government must not be given the power to criminalize speech it deems distasteful or annoying, The Rutherford Institute has asked the U.S. Supreme Court to stop the prosecution of a Texas man who faces up to one year in jail and a $4000 fine for sending emails to police criticizing them for failing to respond to his requests for assistance.

In an amicus brief filed with the Supreme Court, Rutherford Institute attorneys argue that the prosecution of Scott Ogle for sending complaints to a sheriff’s office, including one email stating that officials were “pissing” on the Constitution, violates the First Amendment’s safeguards for freedom of speech and the right to petition the government for a redress of grievances.

Moreover, Institute attorneys argue that the Texas law under which Ogle was charged, which makes it a crime to send “annoying,” “alarming” or “harassing” electronic messages, is so overbroad that it could be used to punish a negative review of a restaurant posted online or caustic Facebook posts.

“It was Justice William O. Douglas who affirmed the right of Americans to speak softly or angrily to government officials, even if our words challenge and annoy. We need not stay docile and quiet, nor must we bow submissively to authority and speak with awe and reverence to those who represent us. That is the genius of the First Amendment,” said constitutional attorney John W. Whitehead, president of The Rutherford Institute and author of Battlefield America: The War on the American People.

In 2016, a frustrated Scott Ogle emailed the Hays County Sheriff’s Office over their alleged inattention to his requests for help. In his emails, Ogle accused one officer of “[being] your typical arrogant, condescending, belligerent self who chooses to look the other way.”

Another email stated “[y]ou have a Constitution to uphold, son, you’re pissing on it” and referred to a deputy as a “little bitch” and a “little state weasel.” Based on these emails, Ogle was charged with a crime under a provision of Texas’ Penal Code for making “repeated electronic messages in a manner reasonably likely to harass, annoy, alarm, abuse, torment, embarrass, or offend another.”

The law also requires that the messages be sent with the same intent. A violation of this statute is punishable by up to one year in jail and a $4000 fine. Prior to trial, Ogle’s lawyer argued that the statute violates the First Amendment—which affirms the rights to freedom of speech and to petition the government for a redress of grievances—because it criminalizes a substantial amount of constitutionally-protected speech.

However, both the state trial and appellate courts rejected Ogle’s constitutional defense. In asking the U.S. Supreme Court to review Ogle’s case and strike down the Texas statute, The Rutherford Institute argues that even if Ogle’s emails were in bad taste, the government must not have the power to judge and punish speech because of its judgment that the speech is rude.

Pointing out that statutes similar to the one being applied to Ogle have been held unconstitutional by other state and federal courts, Institute attorneys have also urged the Supreme Court to resolve the conflict between those rulings and the ruling in Ogle’s case.

The Rutherford Institute, a nonprofit civil liberties organization, provides legal assistance at no charge to individuals whose constitutional rights have been threatened or violated.