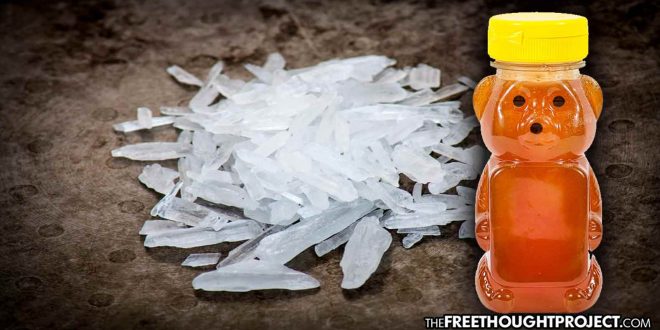 (Natural News) One man’s innocent return to the U.S. from Jamaica turned into an 82-day jail stint thanks to three bottles of honey and a seriously flawed justice system.

When 46-year-old Leon Haughton returned to the Baltimore-Washington International Airport last December after his yearly visit back to his home country of Jamaica, he found himself being detained by U.S. Customs and Border Protection.

He recalled seeing a police dog sniffing his bag, but he figured the object of interest was the leftover chicken he had stored inside of it. The next thing he knew, agents were whispering to one another and he was being taken away.

The problem? Three bottles of honey in his bag that he had purchased in Jamaica were suspected of being liquid meth, and a field test somehow allegedly came back positive. He insisted that they were merely honey that he bought from a roadside stand, but he was charged with possession with intent to distribute a controlled substance and importing a controlled substance into the state.

Haughton, who is a legal green card holder and has been living in Maryland for nearly 10 years, was so shocked that he fainted and had to be brought to the hospital. He was told he was facing up to 25 years in jail.

You might think that a simple misunderstanding like this would be easy to clear up, but that was not the case. Haughton was arrested on December 29; January 17 lab test results from the Maryland State Police lab confirmed that the bottles really were honey after all.

Under normal circumstances, that might have gotten him released and the story would have ended there. Although it’s admittedly an incredibly long time for an innocent person to be in jail, it would have been far better than what happened instead. The state continued pursuing a misdemeanor charge of possession despite the lab results clearing him on the grounds that the lab wasn’t equipped to test liquids, which raises the question of why the honey was tested there in the first place. A request for immediate release on bail was denied, and the bottles were sent to a Georgia Homeland Security lab.

Given the lighter nature of the misdemeanor charge, most people would have been released on their own recognizance at that point. Unfortunately, the original felony accounts against Haughton and the fact that his arrest took place at an airport had triggered an Immigration and Customs Enforcement (ICE) detainer, which meant that he could be deported if the state released him.

Making matters even more complicated was the fact that all of this took place during the government shutdown, so contacting someone about lifting his detainer was an exercise in futility.

Haughton ended up spending 82 days in jail in total. He may have regained his freedom, but he lost both of his jobs on account of the ordeal, one as a construction worker and another as a cleaner. His six children suffered emotionally, and their school performance tanked. His credit was also ruined, and he lost his insurance. He is now living at a hotel while he tries to make ends meet and is afraid of traveling.

He told the media: “They messed up my life. I want the world to know that the system is not right.”

His lawyer, Terry Morris, has said that lawsuits will be filed over the outrageous ordeal. Haughton never received an apology, and he wants to draw attention to what happened. This outrageous story is another depressing reminder that putting innocent people behind bars isn’t just something that happens in other countries.