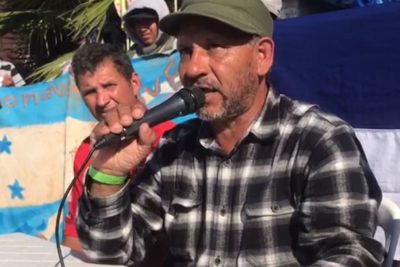 Immigrant-rights agitators dissemble and deceive about “caravan” invaders, calling them asylum-seeking families fleeing violence back home, but the Trump administration has said those cases are a small minority within the 8,000 to 10,000 migrants. And the majority are men, young fit, and military age. This story shows that what has said about there being criminals and terrorists among them is true right at the top. And you can see that this whole enterprise is a shakedown, pure and simple: Ulloa is demanding $50,000 for each migrant to return home. Imagine showing up at another country’s border and being paid off to leave.

Yet the enemedia treats these con artists as heroes.

A man suspected of committing a terrorist attack in Latin America more than 30 years ago is now leading the group of migrants from Central America that is demanding either asylum in the U.S. or $50,000 each to return home.

Alfonso Guerrero Ulloa, who organized a group of roughly 100 migrants to the U.S. Consulate in Tijuana, Mexico, is accused of being involved in a 1987 bombing that injured six American soldiers in Honduras….

The group of migrants that Ulloa led to the U.S. Consulate demanded in a letter that they either receive immediate asylum or $50,000 each to return home along with the removal of U.S. economic and military interests in Honduras, which they blame for the nation’s current poor conditions.

In October 1987, The New York Times reported: “Mexico has granted permanent asylum in its embassy here to a man suspected of planting a bomb that exploded in a Chinese restaurant in August, slightly wounding six United States soldiers and a Honduran civilian.”