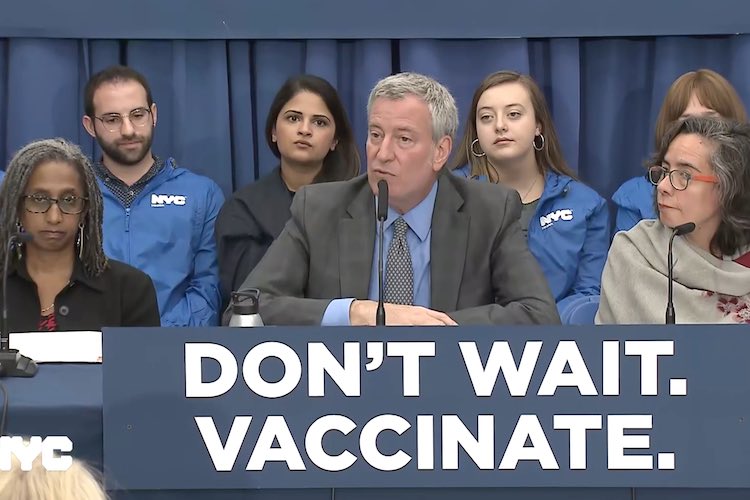 “Today we are declaring a public health emergency, effective immediately. This will mandate vaccines for people living in the affected area. Department of Health will issue violations and fines to people who remain unvaccinated.” ~NYC Mayor Bill de Blasio

In an emergency press conference today, New York City Mayor, Bill de Blasio announced that the city’s health department will be mandating measles vaccines for residents in an area of Brooklyn, amidst a recent spike in cases of measles, with over 300 people affected in this area, 21 of which have resulted in hospitalization. There are no reports of any deaths from measles in this outbreak.

Refusal will result in the issuance of violations and fines of $1000. The mayor did not state what the penalty is for not paying the fine, or whether or not you can refuse the vaccine if you do pay the fine.

This follows on the heels of a similar order last week by New York’s Rockland County, outlawing children who have not had the measles vaccine from being in public spaces. The order was quickly, albeit temporarily, overturned by a New York State Judge. Now NYC is making a similarly bold move which will certainly be challenged in court.

“Just days after a judge threw out Rockland County’s emergency order to ban unvaccinated kids from all public places, NYC’s Deputy Mayor for Health and Human Services Herminia Palacio has, with the mayor’s approval, declared a state of emergency as the number of measles cases since the fall nears 300, with 21 cases resulting in hospitalizations, and nearly 250 in children.” [Source]

Following today’s orders, NYC health officials will now begin reviewing medical records of people in zip codes ZIP Codes 11205, 11206, 11211 and 11249, looking for unvaccinated children as well as adults, then tracking them down. The aim is to directly target the city’s anti-vaccination groups, blaming them for ‘misinforming’ the public.

Public health officials said they were taking the unusual step in response to an antivaccination campaign that has included measles parties, phone calls and voice mails targeting the community with “intentional efforts to give misinformation,” said Herminia Palacio, New York City’s deputy mayor for Health and Human Services.

“There are frank untruths being propagated,” said Dr. Palacio.

This is the first time that New York City has ever issued mandatory vaccine requirements for its residents, even though the city has had similar outbreaks in the past. And while it is saddening that people can die from a disease, the numbers of measles deaths each year due to measles, even during a major outbreak, is minuscule compared to many other public hazards today. Take for example the opioid crisis, which has created tens of thousands of addicts in New York City and in 2017, killed 1,437 New Yorkers.

Measles was declared to be eliminated in the United States in the year 2000, but in recent years the virus has begun making a comeback. Today, in 2019, there is what many are calling a national outbreak of the disease. From January 1st to April 4th of this year, the CDC noted 465 cases nationwide. But the government’s own research offer ample evidence that measles is being transmitted by the vaccinated, a fact which has gone entirely unaddressed by mainstream media and public officials.

The chart below is from the CDC, and shows national numbers of measles infections since 2010.

The government is testing the waters here with the current measles outbreak, working to develop a narrative that casts those who support medical freedom as a threat to the safety of the collective. This is exceptionally dangerous, and far more dangerous and insidious than hundreds people out of hundreds of millions of people contracting a disease that is rarely fatal and rarely causes long-term health problems.

Below is the entire press conference.

This article (Mandatory Vaccines are Here as NYC Mayor Issues Emergency Orders for Brooklyn Residents) originally created and published by Waking Times and is published here under a Creative Commons license with attribution to Alex Pietrowski and WakingTimes.com.