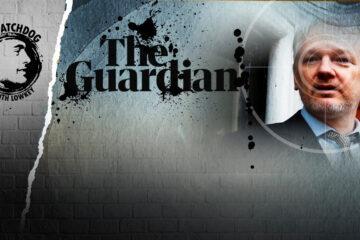 The Mockingbird media is nothing more than the useful idiots of their masters. One of the clearest points to demonstrate this truth is the story of Wikileaks founder Julian Assange. Though he exposed their corporate and political masters for their criminal actions with nothing but documentation, they hated him for it. In fact, they even went so far as to call for a bullet to be put in his head!

Remember When The US Government & Media Called For Julian Assange To Get A “Bullet In The Brain”?

Their contempt for a person telling the truth, like Assange, knows no end.

MintPress News has more on this.

The Guardian was one of WikiLeaks’s partner organizations, being fed bombshell after bombshell, revelations that helped build its brand and its audience. Yet, far from standing up for free speech and an open society, it was in the lead in attacking WikiLeaks and its founder.

he High Court in London has upheld the U.S. government’s appeal to extradite WikiLeaks founder Julian Assange, a key step towards his rendition to the United States. The Australian publisher faces up to 175 years in prison once he sets foot on American soil.

Whether he ever makes it to the United States is still in question. His legal team has indicated they will challenge the ruling, which will inevitably draw out court proceedings and prolong his stay inside Belmarsh Prison. Also of note is the 50-year-old’s health. This weekend, it was revealed that he had suffered a stroke in October as a result of the stress of the trial.

Two individuals who have been closely monitoring the Assange trial are Pablo Navarette and John McEvoy. Pablo is a British-Chilean filmmaker and the founder of Alborada magazine, an outlet concentrating on Latin American politics. John is an investigative journalist whose work documents the impact of the British national security state on public life. In November, the pair published an article entitled ‘“A Lot of Mistakes”: The Guardian and Julian Assange,’ which can be read on MintPress News. Today, they discussed the role that The Guardian, and the mainstream press more generally, have played in persecuting him.

It is now known that UC Global – the private security firm hired to protect the Ecuadorian Embassy, where Assange was confined – was secretly spying on their charge, sending the information they gleaned back to the United States government. This included security cameras and audio bugs. The company even scavenged the embassy’s garbage, stealing Assange’s children’s diapers.

Guardian journalist Stephanie Kirchgaessner was aware of the spying long before it was made public. Yet rather than blowing the whistle, publishing a huge scoop, or even simply notifying Assange privately, she instead chose to write highly dubious articles insinuating that he was an agent of Russian malfeasance. “It tells you what questions journalists were asking at this time. They weren’t asking the right ones,” McEvoy told Lowkey.

The Guardian was one of WikiLeaks’s partner organizations, being fed bombshell after bombshell, revelations that helped build its brand and its audience. Yet, far from standing up for free speech and an open society, it was in the lead in attacking WikiLeaks and its founder. Of particular note is Luke Harding, who, mistakenly or otherwise, published the passcode to a trove of WikiLeaks documents, an act that the U.S. government claims endangered its representatives around the world.

In 2018, Harding also published a viral story that claimed that Assange had secretly met with Trump campaign manager Paul Manafort and unnamed “Russians” while in the Ecuadorian Embassy. The insinuation was that Assange (and Russia) was partly responsible for Trump’s shocking election in 2016.

There were gaping holes in this accusation, not least that there was no record of Manafort ever visiting the embassy, one of the most surveilled buildings in the most surveilled city in the world. Police, reporters, activists and intelligence agents were outside 24 hours a day. Yet Manafort was reportedly able to enter without anyone noticing. Almost immediately, The Guardian walked back the claims, adding qualifying language. Even more embarrassing, it later transpired that Harding’s source was likely a disgraced Ecuadorian agent who had previously burned The Guardian with fake information, forcing them to retract a story.

From being Assange’s partner, the newspaper morphed into “the vanguard or the spearhead of a campaign of vilification by the mainstream media,” Navarette told Lowkey.

If they will do this to Julian Assange, don’t think they won’t think twice about doing it to you and me.