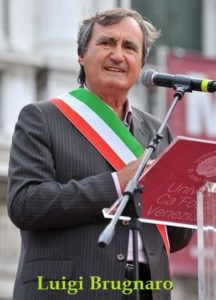 Muslim terrorists are wont to shout “Allahu Akbar” (Arabic for “God is greatest”) in the act of committing terrorism.

The mayor of Venice declared that anyone who shouts “Allahu Akbar” will be shot by snipers. Alas for Americans, it’s not Venice of Los Angeles, California, but Venice, Italy.

Citing an article in The (UK) Times, which requires a subscription to read, the Mirror‘s assistant editor Stephen Jones reports that Venice’s “right-wing” mayor, Luigi Brugnaro, told a conference in Rimini in northeast Italy that he had ordered police to shoot on sight anyone who shouts “Allahu Akbar”, especially in tourist spots like St. Mark’s Square.

Brugnaro said: “If anyone runs into St Mark’s Square shouting ‘Allahu Akhbar’, we will take him down. A year ago I said within four paces, now within three. I will say it in Venetian: ‘Ghe Sparemo’ (We will shoot him).”

Brugnaro recalled the arrest in March 2017 of four suspected jihadists who allegedly planned to kill hundreds of tourist by blowing up the world famous Rialto bridge that spans Venice’s Grand Canal: “They wanted to go to Allah. But we’ll send them straight to Allah before they can do any damage.”

Brugnaro also said: “I have never been politically correct…that’s why we also need a naval blockade against people coming into Italy from north Africa.”

Brugnaro was applauded by delegates when he said, referring to the August 2017 terrorist attack in Barcelona when Moroccan Muslims drove into pedestrians, killing 14 and injuring 100: “In contrast with Barcelona, where they had not set up protection, we keep our guard up.”

But not all the conference delegates applauded Brugnaro.

A video was published online showing the left-wing mayor of Florence, Dario Nardella, rushing up to Brugnaro after the speech shouting “Allahu Akbar!” and laughing.

Nardella later apologized on Facebook: “I apologise for some comments in an online video. It was not my intention to offend anyone, not least the Muslim community, nor to joke about their religion or neither to reference the tragic events of our times. In fact, during that video, I distance myself from the statement (made) by my colleague Brugnaro about Muslims during his speech at the Rimini meeting.”

Dario Nardella, 43, has been the mayor of Florence, Italy, since 2014. He is a member of the Democratic Party.

Luigi Brugnaro, 57, is a conservative politician and entrepreneur who has been the Mayor of Venice since June 2015. He ran for the office as an independent.