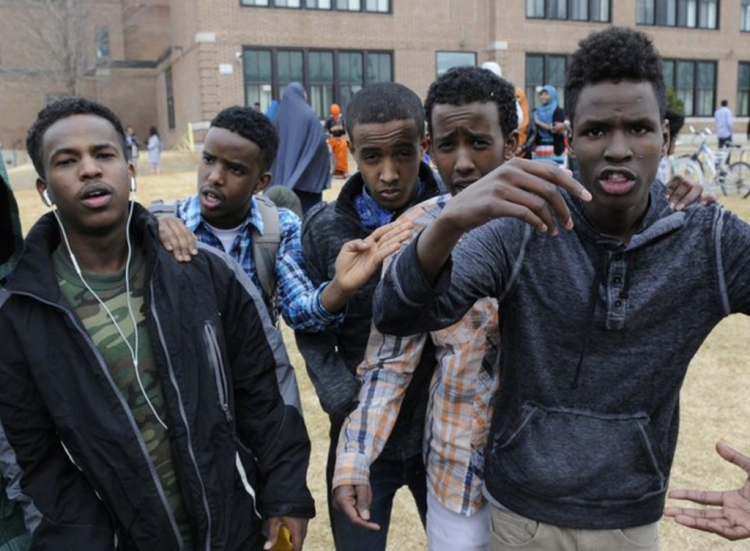 We’ve brought you several stories of the Muslim colonization of America from Florida to Maine to Michigan and Minnesota. Many of those settling into Islamic communities in America have anything in mind but assimilation. The latest evidence of this comes from Minneapolis, Minnesota where Somali gangs are now claiming territory and a young Somali has now gunned down another young man.

First, the story comes via a variety of local outlets, but not one mainstream outlet reported on this that I could find.

Minneapolis police were dispatched to the area of 23rd Avenue North and Aldrich Avenue North on Friday at around 6:25 p.m. for a shooting, according to the criminal complaint.

The caller told officials they heard six to eight shots and that there was someone on the ground, the complaint states.

When officers arrived, they stopped a vehicle that dispatched told them had a victim in the back, according to the complaint.

One of the occupants of the vehicle told police “my brother is shot,” according to the complaint.

Police looked inside the vehicle and noticed a man laying on the rear passenger side seat with blood on his face, the complaint said.

Officers attempted to speak to the victim but he was unresponsive, according to officials.

The victim had two bullet wounds in his chest and was declared dead on the scene, the complaint reads.

Police say the victim is known to them as a high-ranking member of the “Somali Outlaws,” according to the complaint.

After the incident, a vehicle arrived at Hennepin Healthcare, and Mahad Ali ran to the front door saying he had been shot. He underwent surgery for a bullet wound.

According to witness interviews and surveillance video, one of the 1627 boys picked up a drug dealer and drove him to 23rd and Aldrich avenues so the dealer could sell to Mahad Ali, who got into the car, too.

Less than a minute later, Mustafa Ali walked up to the backseat door of the car and the two men fired at each other.

Mahad Ali’s mother told police her son and the victim had “a beef” for months, even visiting Mustafa Ali’s mother previously to try and reconcile.

According to the Star Tribune, “The slaying was the latest in a bitter feud between Cedar-Riverside neighborhood gangs and their rivals, who claim the area around Karmel Mall.”

Additionally, in September, a high-ranking Somali gang member was shot and killed during a shooting that was apparently staged to look like a home invasion.

According to the charges, “both gangs are known for retaliatory and escalating violence that often manifests itself in drive-by shootings, attempted murder and murder. They are known by law enforcement to attack each other over using the same drug dealers.”

What’s interesting is that these gangs have been flourishing in the area for some time.

Tore from Loomered.com comments on what is causing this to occur.

“Those arriving from Somalia are accustomed to gang related behavior since culturally tribal behavior is prevalent between clans,” she added. “Fights and even murder in public areas are common in Somalia. Such incidents that may result in death are oddly “socially acceptable” when there is rivalry or “beef” between them.”

The Somali gang problem is incredible and the leadership in Minneapolis and Minnesota in general is allowing it to grow and fester. When people come to the United States as refugees it is because they seek to escape from a nation that considers such acts normal to one that denounces them and offers safety.

It’s obviously no surprise how a person who hates America, is a terrorist sympathizer, and refers to the 9/11 attacks as “some people did some things,” is the representative of the Somali Clan Gang area. It’s alleged that Omar is part of a clan in Puntland in which her alleged REAL father is a top member of the Al-Shabab affiliate group. We haven’t confirmed this information because Homeland Security and ICE citing “ongoing investigations” rapport when asked.

Why are we allowing them to bring their cultural wars to our backyards?

The agencies responsible in screening these refugees must be audited. Minneapolis is a dangerous city due to high gang crime by the people we so graciously allowed entry into our country to offer them a better life. With so many Christians being persecuted in nations we admit refugees from, why are we bringing those with values that are contrary to ours?

Indeed, why are we bringing them in and why are we allowing them to colonize and terrorize neighborhoods. Perhaps, we should be rethinking deporting them back to their homeland.