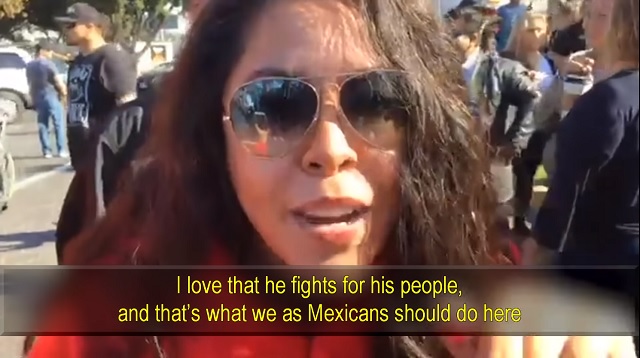 Video out of Mexico shows a Mexican business woman praising Donald Trump saying she loves “that he fights for his people” and “that’s what we as Mexicans should do here.”

“I am Mexican. I support Trump,” the woman tells a group of journalists. “I love that he is a Nationalist. I love that he fights for his country.”

“I love that he fights for his people and that’s what we as Mexicans should do here.”

The woman said she has Mexican-US dual citizenship but chooses to live in Mexico because she wants to fight to improve her country.

The video was translated by VladTepesBlog and shared Tuesday on YouTube:

A reupload of the video also went viral on Twitter:

Media will never show you this!

"We as Mexicans need to fight for our country the way Trump fights for his people, country & borders" pic.twitter.com/dDk9s6XR8m

Hundreds of protesters organized in Tijuana over the past several days to denounce the caravan as an “invasion” and chant “Mexico First!”