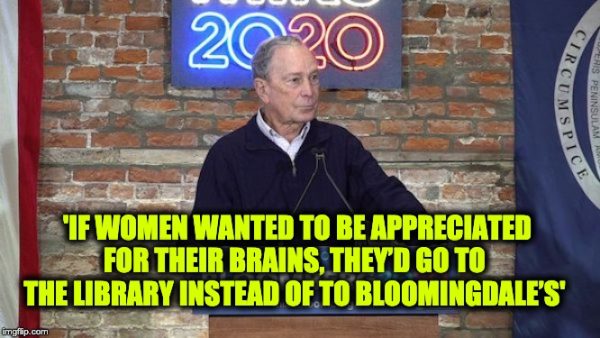 On February 14th, 1990 for Michael Bloomberg’s 48th birthday, staffers at Bloomberg L.P celebrated their boss’ most famous offensive quips and anecdotes by creating a pamphlet and presenting him with a leather-bound copy. Some of the quotes are anti-female, anti-faith, and someone who looks down upon people who aren’t like him. Called The Portable Bloomberg: The Wit and Wisdom of Michael Bloomberg, it was edited by Bloomberg L.P.’s chief marketing officer Elisabeth DeMarse. Some of the tidbits in the pamphlet include:

At the beginning of the book DeMarse wrote “Editor’s Note” that reads, “Yes, these are all actual quotes. No, nothing had been embellished or exaggerated. And yes, some things were too outrageous to include. When I joined BLOOMBERG Financial Markets, I wondered if I had inadvertently joined a religious sect, such was the dedication of the employees to its founder, and their enthusiasm for the company. Today, I’m a convert. And when we rent Madison Square Garden for mass nuptials, I’ll be there.”

“This is Bloomberg culture,” she said. “You have to understand, Mike is very uncensored.” After a second, she went on: “When Mike says outrageous things, it’s sort of a test. It’s a loyalty test. It’s a bonding thing when everyone laughs. You stop thinking that it might be inappropriate.”

“Is all of this a direct quote, Wolff asked, these are his actual words?”

Here are some more Bloombergisms:

Michael Bloomberg’s recently revealed statements about stop and frisk, show him to be a racist, but his booklet, embedded below shows him to be an arrogant misogynist who doesn’t like liberalism or faith. Bloomberg is the new Democratic Party’s great “moderate” hope. In other words, they are in greater trouble than most commentators think.

The Portable Bloomberg by Jeffrey Dunetz on Scribd