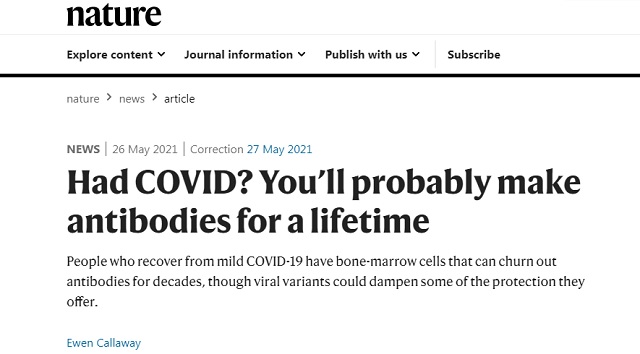 The media is finally admitting after 15 months of spreading wild hysteria and misinformation that people who catch the coronavirus are probably immune for years if not for life, at least for similar strains.

“Had COVID? You’ll probably make antibodies for a lifetime,” reads a headline from Nature published Wednesday.

Many people who have been infected with SARS-CoV-2 will probably make antibodies against the virus for most of their lives. So suggest researchers who have identified long-lived antibody-producing cells in the bone marrow of people who have recovered from COVID-19.

The study provides evidence that immunity triggered by SARS-CoV-2 infection will be extraordinarily long-lasting. […]

Researchers presumed that SARS-CoV-2 infection would trigger the development of BMPCs — nearly all viral infections do — but there have been signs that severe COVID-19 may disrupt the cells’ formation. Some early COVID-19 immunity studies also stoked worries, when they found that antibody levels plunged not long after recovery.

To identify the source of the antibodies, Ellebedy’s team collected memory B cells and bone marrow from a subset of participants. Seven months after developing symptoms, most of these participants still had memory B cells that recognize SARS-CoV-2. In 15 of the 18 bone-marrow samples, the scientists found ultra-low but detectable populations of BMPCs whose formation had been triggered by the individuals’ coronavirus infections 7 to 8 months before. Levels of these cells were stable in all five people who gave another bone-marrow sample several months later.

How many epidemiologists and others were called “conspiracy theorists” and banned from the internet for saying this over a year ago?

Here’s a look back at some of the media’s hysteria: Researchers from the Dresden University of Technology released a preprint study last week finding that so-called “Long Covid” symptoms are just as prevalent in adolescents who recovered from Covid as adolescents who never even caught Covid.

Mental Health of Adolescents in the Pandemic: Long-COVID-19 or Long-Pandemic Syndrome?

Backround: Post-COVID19 complications such as pediatric inflammatory multisystem syndrome (PIMS) and Long-COVID19 move increasingly into focus, potentially causing more harm in this age group than the acute infection. To better understand the symptoms of long-COVID19 in adolescents and to distinguish infection-associated symptoms from pandemic-associated symptoms, we conducted a Long-COVID19 survey, comparing responses from seropositive and seronegative adolescents. To our knowledge, data of Long-COVID19 surveys with seronegative control groups have not been published yet.

Methods: Since May 2020 students grade 8-12 in fourteen secondary schools in Eastern Saxony were enrolled in the SchoolCovid19 study. Seroprevalence was assessed via serial SARS-CoV-2 antibody testing in all participants. Furthermore, during the March/April 2021 study visit all participants were asked to complete a 12 question Long-COVID19 survey regarding the occurrence and frequency of difficulties concentrating, memory loss, listlessness, headache, abdominal pain, myalgia/ arthralgia, fatigue, insomnia and mood (sadness, anger, happiness and tenseness).

Findings: 1560 students with a median age of 15 years participated in this study. 1365 (88%) were seronegative, 188 (12%) were seropositive. Each symptom was present in at least 35% of the students within the last seven days before the survey. However, there was no statistical difference comparing the reported symptoms between seropositive students and seronegative students. Whether the infection was known or unknown to the participant did not influence the prevalence of symptoms.

Are we going to have to wait another 15 months before the media admit it’s not a good idea to vaccinate people who’ve already caught the virus?

Meanwhile, the historically known risks of vaccine enhancement and vaccine-induced viral mutations are not only being ignored but if you voice such concerns on social media you can be censored and banned.

Big Tech are simply making these rules up as they go “in consultation with public health experts” and seemingly US intelligence agencies, according to a report from AP.

On Thursday, Facebook came out and announced they’ll no longer be banning people and removing claims that Covid was manufactured in a lab “in light of ongoing investigations into the origin of COVID-19 and in consultation with public health experts.”

“Facebook’s reversal comes as President Joe Biden ordered U.S. intelligence officials to ‘redouble’ their efforts to investigate the origins of the COVID-19 pandemic, including any possibility the trail might lead to a Chinese laboratory,” the AP reported.

What was once a bannable offense is now being encouraged as the Biden regime has decided to shift from blaming the whole Covid debacle on Trump to blaming it all on China.

As a reminder, scientists found Covid-19 antibodies in blood samples from Italy going all the way back to September 2019.

How long will we have to wait before Big Tech get enough “new studies” and have enough “consultations with public health experts” to determine that it’s OK to tell people that healthy living, healthy eating and getting a proper amount of Vitamin D helps prevent respiratory viruses?

Will they ever admit it, or are they going to keep insisting forever that health and wellness can only come out of the end of a needle?