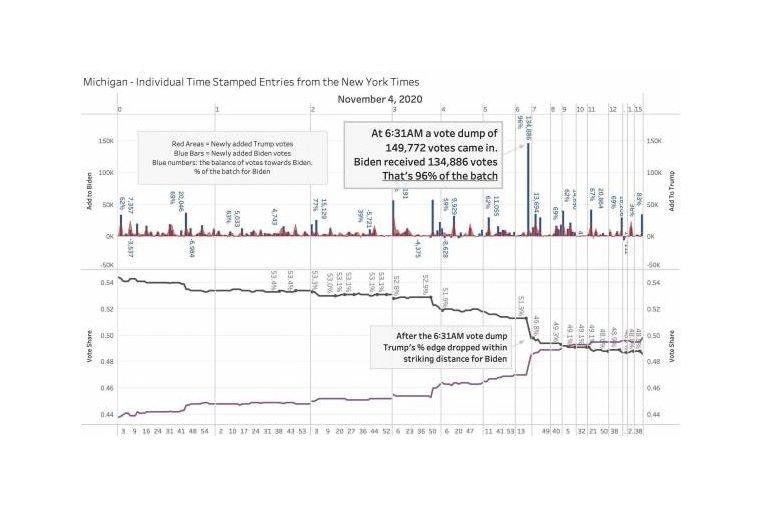 Well, this is not altogether surprising is it? There is a plethora of evidence that the election was a fraud. However, this is not the first time it’s occurred and the fact that states continue to buy into the use of electronic voting booths only adds to the corruption. Now, we discover that Michigan, led by the treasonous criminal Governor Gretchen Whitmer, removed 177,000 voters from voter rolls in January 2021 after certifying a win by China Joe Biden by 154,000 votes in November 2020. Imagine that!

Michigan now admits after ‘certifying’ the 2020 Presidential election, that more voters should be removed from their voter rolls than there were votes won by Joe Biden in the race. Mixed with other suspected fraud, (like 141,000 ballot drops at 6am the day after the election) all the ballots in this state should be forensically audited to determine the full extent of the election fraud.

There was so much fraud in Michigan in the 2020 election it is difficult to know where to start. There were late-night ballot dumps

There were vans delivering ballots in the early morning after the election under the Detroit TFC Center where votes were being counted:

Republicans were harassed and prevented from viewing the ballot counting in the same TFC center the next day. When finally some Republican observers forced their way into the room they found the poll workers counting Xerox copies of military ballots all for Biden:

The Michigan secretary of state removed 177,000 inactive voters from the state’s voter rolls after settling a legal challenge.

The state removed the names from the voter rolls in late January because the voters no longer live in the state or did not respond to the state’s inquiries about their addresses, according to a Tuesday district court announcement. The state performed the post-election audit during a legal battle with the Honest Elections Project, an election watchdog.

Michigan’s 2020 election was run by crooks. A forensic ballot count of all the ballots in Detroit, if not the entire state, should be performed.

Of course, it was! It was run by crooks in several states. Frankly, I question the elections in my own State of South Carolina where a person like Lindsey Graham continues to get elected to office despite his own treason Islamic jihadis, attacks on the Second Amendment and putting children in danger with his lawlessness.