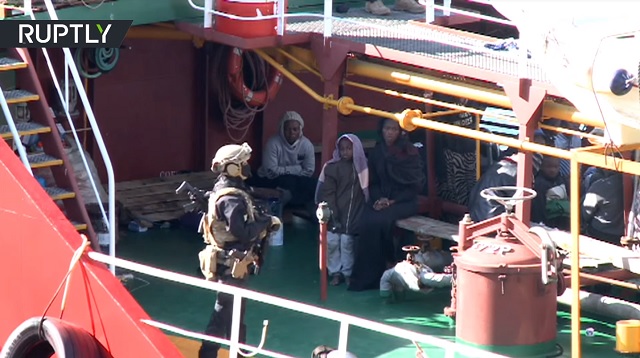 A cargo ship was hijacked by a large group of over 100 African migrants after rescuing them from a sinking ship off the coast of Libya on Wednesday.

The migrants demanded they be taken to Europe rather than back to Libya.

MIGRANTS have hijacked a merchant ship which rescued them off the coast of Libya and it is now sailing towards Malta.

Nationalist Italian interior minister Matteo Salvini branded the migrants as “pirates” after it was announced they were heading towards Malta.

Mr Salvini said: “These are not migrants in distress, they are pirates, they will only see Italy through a telescope.

“This is clearly a case of organised crime.

Euro News covered the hijacking in this hilarious propaganda piece on Thursday morning:

They attack Matteo Salvini and suggest it’s “shameful” for him not to let into his country an army of pirates who despicably hijacked the ship of their rescuers.

They even hilariously claim it’s “not technically piracy” because piracy needs to involve “two ships” and not one — even though it did involve two ships!

RT reports the ship was rescued Thursday morning after being stormed by Maltese special forces:

Malta deployed patrol boats and a helicopter to capture a migrant-packed Turkish tanker after it was hijacked by asylum seekers rescued by the crew near Libyan shores.

The hijacked ship was seized by the Maltese special operations unit on Thursday morning. It was escorted to Malta’s capital, Valletta where all the migrants are due to be handed over to the police. Several patrol boats and a helicopter participated in the operation to intercept and capture the vessel.

[…]There are believed to be 108 migrants on board, around 77 of which are adult men, the Times of Malta reported, citing government sources. Other reports suggested that the number of migrants may be as high as 120. It is unclear how many asylum seekers participated in the hijacking.