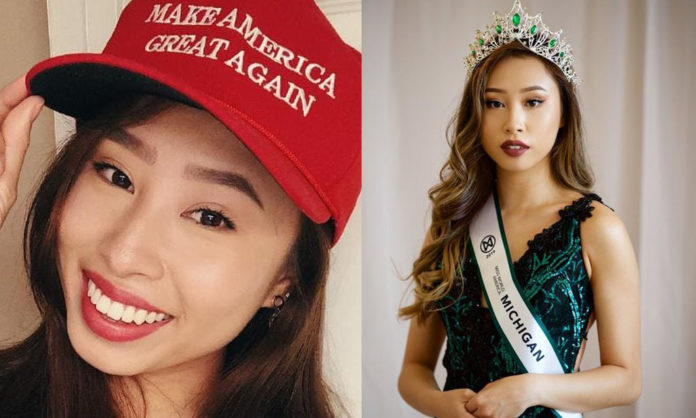 What a crazy “politically correct” world we live in…

Several websites are reporting that the reigning Miss Michigan, Kathy Zhu, has been stripped of her title.

A Donald Trump-supporting beauty queen has been stripped of her title after being accused of posting “offensive” statistics on social media. Online conservatives have since rallied around her and accused the Miss Indiana and Michigan World America of anti-conservative bias.

Kathy Zhu, 20, is a University of Michigan student who earlier this week was named as an Indiana and Michigan 2019 national finalist in her bid to make it to the Miss and Teen World America Preliminary and Finals, which will be held in Las Vegas in October.

Zhu—who was born in China and moved to the U.S. aged 5—posted her conversations with the organization on Twitter, sparking fury among online conservatives.

Zhu said on Twitter she had been stripped of her title “due to my refusal to try on a hijab in 2018, my tweet about black on black gun violence, and ‘insensitive’ statistical tweets.”

More at PC Must Die…

The truth is now punished in America.

There is no such thing as free speech UNLESS that speech is the hate speech of the violent and ignorant left.

20-year old Miss Michigan World America Kathy Zhu had her state title taken from her due to the beauty pageant organization disliking 2017 and 2018 tweets of hers that they deemed insensitive and racist.

In her tweets, she spoke about black-on-black gun violence as well as a college event where a Muslim Student Association allegedly tried to force her to try on a hijab.

The Miss Michigan World America 2019 has since deleted their original announcement of her crowning. Zhu will no longer go on to represent Michigan in the Miss World America pageant in Las Vegas.

As is the norm with political censorship these days, the MWA is demanding that Kathy Zhu act like she never won the title of “Miss Michigan” in the first place.

Prominent conservative commentator Kathy Zhu, known as Political Kathy on Twitter, posted a screenshot of an email by state director of the Miss World America beauty pageant for Michigan, Laurie DeJack, notifying her that she must dissociate herself from the contest due to “offensive, insensitive and inappropriate content” found on her social media.

DeJack said that the MWA no longer recognizes her as a “participant of any sort or in any capacity” and demanded she removes all the mentions of her taking part in the pageant.

Zhu also posted screenshots of her lengthy text-message exchange with DeJack, in which she informs Zhu that there has been a “huge issue” with her, without providing any details. As Zhu pressed DeJack for more information, the director cited a 2016 tweet by Zhu, reading: “Did you know that the majority of black deaths are caused by other blacks? Fix problems within you own community before blaming others.”

He may never make the baseball Hall of Fame, however, because of accusations of using performance enhancing drugs.

Still Barry Bonds existed and his records stand, for now.

Kathy Zhu was the reigning Miss Michigan for 2019.

She has been told to never mention that fact again, because she dared have opinions that some didn’t like.

There is no longer any semblance of free speech in America.

Accused cheaters get better treatment than free-thinking conservatives who dare open their mouths.

Free speech is now being punished.