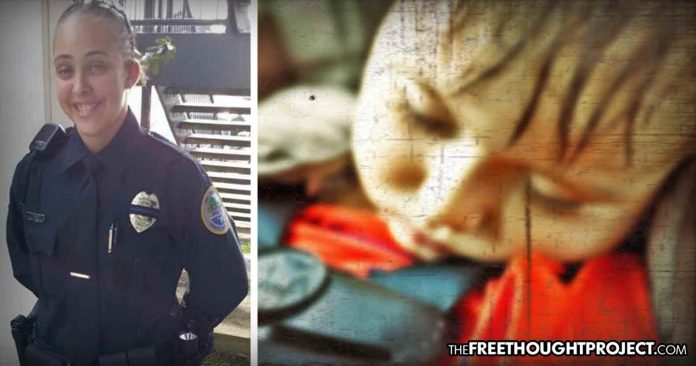 Long Beach, MS — Leaving a child in a hot car until they die is a tragic mistake that roughly three dozen parents make every year in this country. This nightmarish negligence comes with a punishment no prison sentence could ever trump. Now, a former cop from Mississippi will learn her fate after she pleaded guilty to this very same horrifying blunder of leaving her three-year-old daughter strapped in her hot patrol car until she died—as this cop had sex with her supervisor inside his home.

On September 30, 2016, Long Beach police officer Cassie Barker strapped her three-year-old daughter into a car seat in the back of her patrol car and entered her supervisor’s home for a mid-day romp. Barker knew the air conditioner did not work, but nevertheless turned on the vent and went inside.

As her daughter sat strapped in her death bed, Barker had sex with officer Clark Ladner inside the home. After the deed had been done, Barker and Ladner then fell asleep.

For this gross act of negligence, Barker was charged with second-degree murder. However, earlier this month, she pleaded guilty to a reduced charge of manslaughter in a plea deal.

Prosecutors recommended a sentence of no less than 20 years.

“I don’t know what I could ever do to you that could be worse than what you’ve already experienced,” Harrison County Circuit Judge Larry Bourgeois told her. “You will forever be entombed in a prison of your own mind.”

Bourgeois said he will consider the prosecutor’s recommendation before her April 1 sentencing.

What makes the case of former police officer Cassie Barker so terrible is that she is a repeat offender. Barker had previously lost custody of Cheyenne for doing the exact same thing a year earlier.

According to the AP, Barker went into a store in nearby Gulfport, and a concerned passerby called police. Child protective services took temporary custody of her, and Baker was suspended for a week without pay.

Because of her blue privilege, Cheyenne’s father, Ryan Hyer was never notified and was helpless to prevent the future event.

“Every time I close my eyes, I picture her suffering, and then I picture her laying in this coffin,” Hyer said Monday, the AP reported. “I still see her smiling and laughing in my head, and I would assume that smile and laughter turned to pain and suffering in that instance.”

Hyer has since filed a wrongful-death lawsuit against both the Long Beach Police Department and the Mississippi Department of Child Protection Services for failing to notify him.

While Barker’s guilty plea may land her in jail, as TFTP has reported, not all cops who leave their babies in hot cars until they die get charged.

Officer Mark Fanfarillo left his 4 ½-month-old baby, Michael, in his car during the summer of 2016 — for nearly nine hours — but Oneida County District Attorney Scott McNamara refused to press charges.

According to local WSYR-TV, the D.A. said Fanfarillo first realized he’d abandoned the baby in the car when his wife contacted him to say Michael had never been dropped off at the family’s daycare provider. Fanfarillo, McNamara explained, rushed out to the car after that call and “found his son’s lifeless body.” Although Fanfarillo “relentlessly” attempted to resuscitate the baby, the effort was ultimately unsuccessful.

As McNamara’s office said in a statement:

“The facts and evidence in this case do not reach the threshold required for criminal liability,” which, in New York, demand “a person must fail to perceive that a substantial and unjustifiable risk will result from their conduct. A lapse or loss in memory is insufficient proof to satisfy the legal requirement of failing to perceive a risk — something more is required.”

According to McNamara, the officer placed Michael in the back seat to drop his elder child at daycare — though he typically didn’t bring the youngest along for the ride. After returning home, Fanfarillo simply forgot the baby was strapped into his carseat, did a few chores, and, like Barker did, he fell asleep — while Michael suffered in oppressive summer heat, eventually dying of hyperthermia, over 8 ½ hours later.