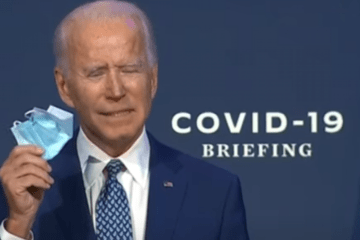 Missour-based US District Judge Matthew Schelp, a Trump appointee, issued a preliminary injunction against the Biden regime’s “vaccine” mandates for health care workers at Medicare and Medicaid certified facilities, which covers the ten States of North and South Dakota, Nebraska, Wyoming, New Hampshire, Missouri, Kansas, Iowa, Alaska, and Arkansas.Schelp in his 32-page opinion decided that the detrimental impact of losing qualified healthcare workers outweighs the need for employees to be vaccinated and said the mandate imposes a burden “on the ability of healthcare facilities to provide proper care, and thus, save lives.”

In his opinion, Schelp clearly laid out three ways in which Biden’s vaccine mandate is unlawful, leaving little doubt as to what his final ruling would be. Firstly, he argued that the Biden administration did not follow Supreme Court precedent in issuing the mandate because it did not first seek the approval of Congress to enact such a wide-reaching rule.

“But even if Congress’s statutory language was susceptible to CMS’ [Centers for Medicare & Medicaid Services] exceedingly broad reading—which it is most likely not—Congress did not clearly authorize CMS to enact the this politically and economically vast, federalism-altering, and boundary-pushing mandate, which Supreme Court precedent requires,” he wrote.

Secondly, he noted that even if Congress had approved the rule, failure to allow notice and comment before enacting the mandate is “grounds for invalidating the rule.”

Lastly, Schelp said the plaintiffs are “likely to succeed” in establishing that the vaccine mandate for healthcare workers is “arbitrary or capricious.” More specifically, he challenged the Biden administration’s reasoning for the mandate on several fronts, including that the CMS “lacks evidence” showing that “vaccination status has a direct impact on spreading COVID in the mandate’s covered healthcare facilities.”

“In general, the overwhelming lack of evidence likely shows CMS had insufficient evidence to mandate vaccination on the wide range of facilities that it did. Looking even beyond the evidence deficiencies relating to the specific facilities covered, the lack of data regarding vaccination status and transmissibility—in general—is concerning,” he wrote.

Schelp also indicated the Biden regime failed to consider other alternatives to injection or rejected those alternatives without evidence.

Before everyone hoops and hollers about a win for health care workers, Schelp’s 32-page opinion had some caveats. Schelp cited that the Centers for Medicare/Medicaid Services (CMS) rejected a daily or weekly testing option for employees, citing the approval for such in the ETS formulated by the Occupational Safety and Health Administration (OSHA). At the same time, Schelp stated the regime totally ignored science by rejecting natural immunity.

The tests are fraudulent, not a diagnostic test, produce highly false results, is also under Emergency Use Authorization, and has been recalled by the Centers for Disease Control (CDC). What kind of “option” is that? It would require individuals submit themselves to an experimental test that is fraudulent under recall by the CDC. Regardless of whether an unconstitutional agency or a constitutional one “approved” any sort of testing, using a fraudulent recalled test, the fact remains no one is obligated to participate in any experiment whatsoever. Why did not Schelp simply point to the law, the Constitution, and the Nuremberg Code in his ruling?

Schelp accused the Biden regime of “ignoring science”; but, isn’t Schelp just as guilty for failing to cite the experimental nature of both the tests and injections? Isn’t he also ignoring the science on the tests as non-diagnostic as indicated by its inventor Kary Mullis? To cite using a non-diagnostic, fraudulent, recalled “test” as an option ignores science.

He also cited the past practice of CMS to “encourage” individuals receive “vaccines” instead of forcing or mandating that option, while failing to adequately explain its reversal in position.

Judge Schelp highlighted the consequences of “mandating” injections on health care facilities, causing some to possibly close and others to cut back on services due to lack of staffing.

“Thus, if the mandate goes into effect, it will irreparably harm patients by impeding access to care for the elderly and for persons who cannot afford it—directly contrary to Medicare and Medicaid’s core objective of providing proper care,” he continued. “In sum, Plaintiffs’ evidence shows that facilities—rural facilities in particular—likely would face crisis standards of care or will have no choice but to close to new patients or close altogether, both of which would cause significant, and irreparable, harm to Plaintiffs’ citizens.”

The judge’s statements on the hampering of health care facilities due to mandated injections is spot on when addressing staffing issues to provide proper care for patients. However, another mechanism is at play – hospital “protocols” requiring patients to either be injected with the COVID-19 excipient or have a COVID-19 test, using a fraudulent, non-diagnostic recalled product, before being treated. Of course, the case is not addressing this issue – only the “mandates” for health care workers. Yet, this is another barrier to proper care. Where is that being addressed by health care workers or other individuals? Even if the judge rules the “mandate” cannot proceed, it doesn’t mean these facilities will discontinue their “mandate” policy for workers and it certainly doesn’t mean “mandate” protocols for patients will change.

So far, there have been reports of two individuals awaiting organ transplants who were denied based on not being injected with the COVID-19 excipient. One of those individuals capitulated, under coercion and duress, in order to receive a double lung transplant and died shortly after his second dose. Medical care is now being denied individuals based on injection status, resulting in deaths due to either no treatment or by COVID-19 injection. Where are the health care workers in addressing the immorality, lawlessness, and ethics violations against patients when it comes to discrimination in medical care based on injection status? Where are these same health care workers fighting injection mandates for themselves standing up for patients faced with the choices of potential death or injury from the injection, potential death or permanent injury from their medical condition, or permanent disability from an untreated injury such as a broken bone, head trauma, or other emergency?

Here’s the kicker. Despite getting the injection, hospital protocol still requires employees to wear face masks, which have been shown in several scientific random controlled trials, and peer reviewed, to be useless in preventing infection or transmission of anything. Remember, we are operating on the unproven germ theory here. And, if by chance the “mandate” is halted and facilities comply, facility employees will still be required, along with patients, to wear face masks. To keep their jobs, they will happily comply, as they have been seen to do in the past.

So, what would have been accomplished? On the one hand, it would free these health care workers from “mandated” injections; however, they would still subject themselves to “mandated” face masks that are useless and only theater. They would not gain true freedom but only a semblance of it. And, it would not stop the facility protocols applied to patients.

This is a great first step; but, it is only one step of many that should be brought to the forefront in addressing the assault on the people by a mentally incompetent dictator, along with his henchmen in the government alphabet agencies, various “public health entities”, the medical community, and State entities, as well as both chambers of Congress. While the people are busy hacking at the branches of the tree, the people are failing to attack the root, which is proving there is a pandemic. All of these measures were put in place on the premise of a pandemic emergency caused by a virus that not one scientific entity has isolated or proven to exist. Until we lay the axe to the root of the tree, taking it down once and for all, hacking the branches still leaves the tree and all its roots, meaning the crux of the tyranny remains. And, if you know anything about trees, it can produce new branches when the roots remain.

Schelp claims halting the “mandate” will allow time to “ensure” federal agencies are not assuming power or extending the power beyond what Congress has delegated to them. The Biden regime has been prevented from enforcing the injection mandate pending a trial on the merit of the mandate or until the court issues further orders. As we have seen in the past, court orders and decisions mean little to those bent on engaging in despotism and tyranny. Again, all of this is predicated on a non-proven to exist virus supposedly causing a pandemic resulting in a declared emergency.

Moreover, this does not stop health care facility protocols for workers and patients – it only addresses the government’s initiation of a mandate. Remember, these same facilities mandated employees receive an influenza injection as a condition of employment in 2010, which they complied. These same facilities implemented mask mandates as a condition of employment and the people complied. So, the question that will eventually emerge is, “why are health care workers balking on this ‘vaccine’ when they complied readily with the influenza injection?” It is a question that will be brought to the forefront eventually in proceedings against facilities.

Buckle up Friends! It’s going to be a roller coaster ride. In the meantime, put on your armor of God and be ready to take action as needed.