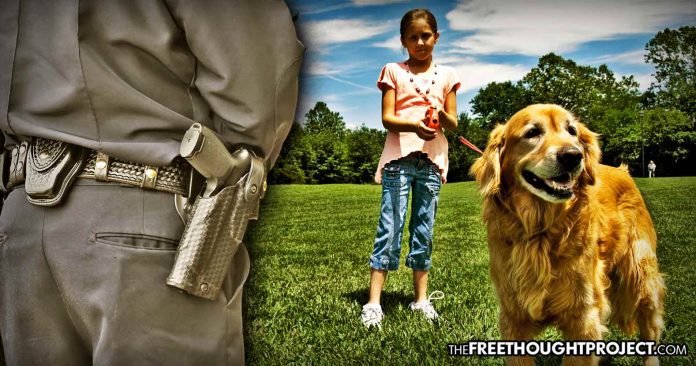 nan·ny state
noun
the government regarded as overprotective or as interfering unduly with personal choice.

Wilmette, IL — Walking a dog as a child in the land of the free has now become a reason for state agents, including armed police officers, to visit your home and harass you. If you think this sounds crazy or outlandish, consider the following case out of Wilmette, Illinois in which a mother was investigated for allowing her daughter to walk the dog around the block.

As the establishment continues to encourage Americans to rat out their neighbors through endless “see something, say something ” propaganda campaigns, outright police and nanny state insanity is unfolding all around us. Corey Widen and her 8-year-old daughter have just experienced this first hand when a neighbor called police after seeing Widen’s daughter walking their dog.

When an indoctrinated neighbor called the police to tell them a child was outside without their helicopter parent hovering over them, the entirely common and regular activity of walking a dog then prompted a police state action involving cops and the Illinois Department of Children and Family Services.

“For something like this to happen to me, there’s something really wrong,” said Widen. Widen explained to the Chicago Tribune that her 8-year-old daughter, who is home schooled, is constantly supervised by her and the only part of the day she is alone is when she is walking the dog. What’s more, Widen says she can see nearly the entire walking route from outside her window.

“The funny thing is … I’m a joke with my friends because my kids are around me all the time.”

Despite the fact that Widen is a good parent, police were dispatched to her home last week. When officers saw that the girl was entirely fine, luckily, they left without arresting anyone. However, shortly after, the Widen’s got a visit from DCFS.

The DCFS launched their own investigation into the family and interrogated Winden’s 8-year-old daughter and her 17-year old son. But they didn’t stop there. DCFS also went after other family members, and even their pediatrician.

Because a neighbor called 911 to report a child for walking a dog, a two-week long investigation into the Widen family was launched—a sad state of affairs indeed. After wasting taxpayer dollars, DCFS admitted they had found no evidence of neglect and Widen was finally free to go on about her life.

Although she is stressed about the entire situation, Widen is not going to change how she goes about parenting.

“Everyone needs to allow the parent to do what is best for their family,” she said. “No one will dictate my parenting choices.”

Sadly, as the Chicago Tribune reports, Widen’s story is not unique. Mothers in the Chicago area and across the country have found themselves at the center of investigations by police or child welfare officials after their children were spotted alone but unharmed — playing in parks or left for minutes in a car parked outside a store — activities that could pass for typical or harmless but now are perceived by some as unacceptable.

The Free Thought Project reported on the case out of Maryland in which two parents were actually charged with child neglect for allowing their children to walk home from a local park.

The parents were found responsible, by Child Protective Services, of “unsubstantiated child neglect,” for allowing their 10-year-old boy and 6-year-old girl to walk a mile home, from a local playground to the family residence.

Even after the charge, the Meitivs said that they will not change their behavior, as it is the healthy choice for their children. The government has no right to treat parents exercising their well thought out parental judgment as suspects that need to prove they aren’t doing anything wrong.

The true tragedy is the scores of children needlessly taken from loving and capable parents, only to have those children end up stuck in a cyclical system of abuse. All too often these children are victimized, or even killed, while in “the system.”