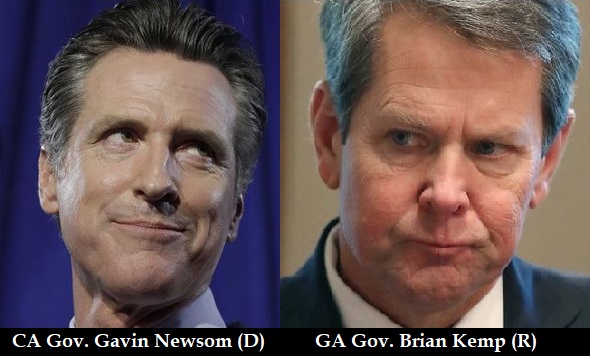 Health Ranger reports for Channel 411 News, Nov. 23, 2020, that in April of this year, it was revealed that California Gov. Gavin Newsom (D) wired half a billion dollars — the first of two installments — to BYD, an electric car company in China, to supposedly purchase “N-95 masks” for COVID-19. (Natural News)

But Newsom sent the money without voting or approval by the state legislature. When pressed about the details of the deal, Newsom refused to disclose them. Nor were the face masks actually delivered. As of November 2020, BYD has yet delivered a single face mask.

Now, there is evidence Georgia Gov. Brian Kemp (R) may also be involved in the same scheme, according to attorney Lin Wood, who is on President Trump’s legal team litigating to prevent the certification of alleged election results.

In an interview on the John Fredericks Show, Wood said that governors send huge amounts of money to China under the cover of buying “covid supplies.” China then launders the money into financial kickbacks for the governors’ family members or business entities. Here’s the link to the interview:

“I believe that Brian Kemp is corrupt, and I think he was corrupted with Chinese money. And I don’t think he wants this election overthrown and the real results posted because then Brian Kemp is going to be facing a Trump administration attorney general, and Brian Kemp would find himself in jail. It’s that simple. He sold himself out, now he’s trying to hide to try to get this election validated even though it’s illegal, because if it’s invalidated.”

“I’m a defamation lawyer. I have stated publicly that Brian Kemp and [Georgia secretary of state Brad] Raffensperger are corrupt and they took money from the Chinese on the Covid deal and on the Dominion [voting machine] voting deal. I bet you anything Brian Kemp won’t sue me for defamation. Because he knows if he did, he’d go into court, I’d have discovery, and I would prove that he did it, that it’s true.”