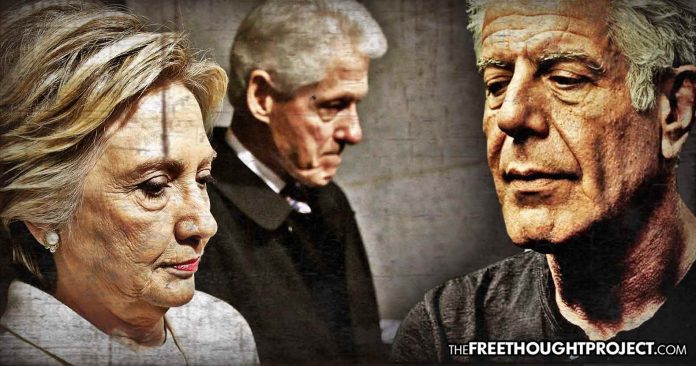 An interview which took place just a few months before his tragic death, shows Anthony Bourdain was unafraid of calling out the establishment. The celebrity chef, TV personality, and staunch antiwar advocate sat down with Popula’s Maria Bustillos for a hard hitting interview during which he blasted Bill Clinton as “Rapey,” and noted how Hillary helped him get away with it.

During the interview, Bourdain was asked whether or not he thought Bill Clinton should have been removed from office after the Monica Lewinsky scandal. Bourdain said that despite Clinton being “A piece of shit,” who was “Entitled, rapey, gropey, grabby, disgusting” should have still kept his job. This was despite “the way that he – and she [referring to Hillary Clinton] destroyed these women and the way that everyone went along” was “screaming in apparent hypocrisy and venality.”

Bourdain went on to note how “When you’re in the room, you think wow, she’s [Clinton] really warm and nice and funny.” However, Bourdain explained, “but the way they efficiently dismantled, destroyed, and shamelessly discredited these women for speaking their truth.”

Bourdain: I don’t think he should’ve been thrown out of office for this.

Bustillos: Why not? We want people who are of excellent character to be in that office.

Bourdain: I think you recognize people for what they are, and you determine for yourself, I’m not voting for that motherfucker ever again! Or anybody who enabled him, you know? This product, okay, I voted for it, it’s in. Is this grounds for pulling someone out of office? I don’t think so.

Bustillos: What if we did have those kind of standards? We want a person who is like, honorable.

Bourdain: I would look at this way. I would never under any circumstances vote for Bill Clinton today. But I think impeaching the guy over Lewinsky was ridiculous. Particularly given today. It was the shaming, discrediting, undermining the women that made both of them unsuitable for any future endeavors. I don’t think they should’ve pulled him from office.

When asked about former President Barack Obama, Bourdain had harsh words for him, but he noted how he would still vote for him again. This prompted Bustillos to call out Bourdain.

Bourdain explained that Obama was “very unconvincing in public, much of the time. I was always wanting a little more passion, stop halting—the halting, careful speech. In person, absolutely the most gracious, graceful, real, funny, uh, no sense of calculation, honest, I mean, you know. Him I’d vote for fuckin’ again, any time.”

Bustillos: Yeah and he like droned people, and bailed out the bankers.

Bourdain: I believe he may not have been the greatest president in history, but he’s one of the fucking nicest, good, one of the best people we ever had.

Bustillos was not having it, and pushed back at Bourdain’s clear misconception of one of the most warmongering presidents in US history.

Bustillos: No!! No. He lied. I worked hard for that campaign. I saw and I just believed him and I was like Hope, Change, Yes. I’m like, I’m so happy, we won, you know! Minute one he started fucking with us. He promised transparency, he like—more whistleblowers were prosecuted than at any time. There’s not one fucking banker in jail. Not one! Jail me one fuckin’ banker! These people stole nine million houses!

Bustillos: This is the thing! We’re all accepting this. It’s like, as long as we keep—

Bourdain: I’m a firm believer in cynical accommodation of uh, the lessening of—compromising one’s principles for the greater good, to a point. Um, but don’t make a living out of it.

Bustillos: There’s a moment where it’s not okay!

Bourdain: Well, for the Clintons it’s a brand. For Obama I genuinely believe he made regretful but calculated decisions, I’m gonna save my ammunition for this, this fucking—

Sadly, as informed as Bourdain was, it appears that he let Obama pull the wool over his eyes.

However, while Obama may have worked his charm on Bourdain, others did not. As TFTP reported last month, from accusing the world of robbing the Palestinian people of “their basic humanity” after a trip to Gaza, to admitting that he was “really knocked sideways by how well we were treated” during a trip to Iran, to remarking that a trip to Cambodia would make anyone want “to beat Henry Kissinger to death with your bare hands,” Bourdain worked to humanize parts of the world that are typically demonized by the United States.

Frequently, I’ve come to regret things I’ve said. This, from 2001, is not one of those times: pic.twitter.com/1NiHlupJkL