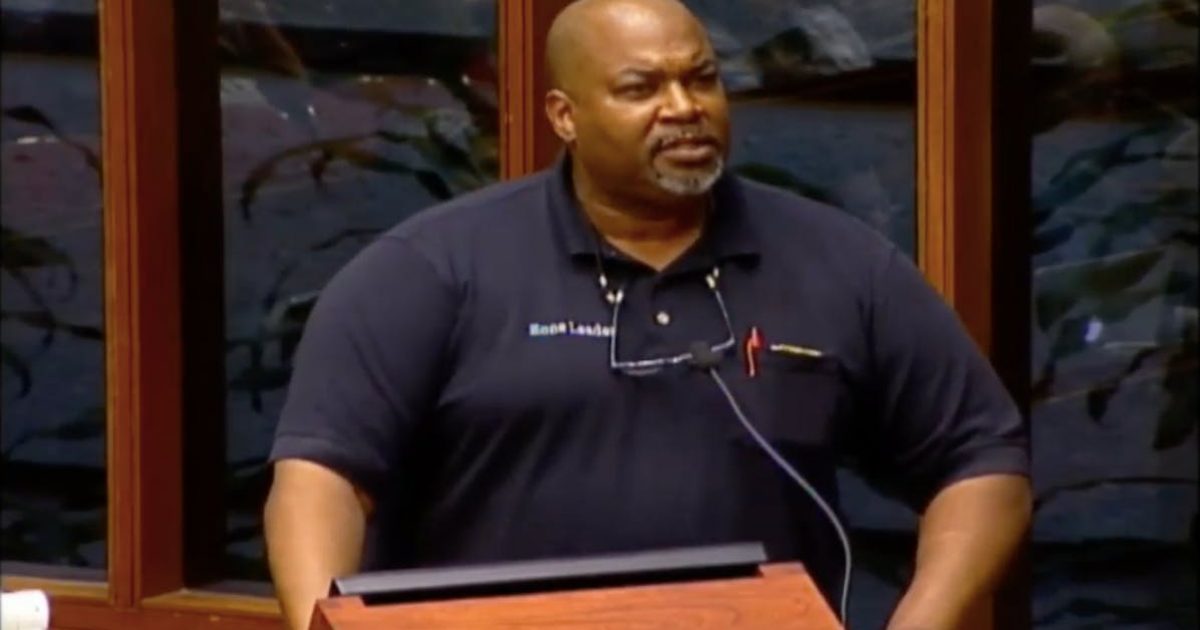 You may remember Mark Robinson, aka Mr. “I’m the Majority,” whose comments to his city council in Greensboro, North Carolina who were considering unlawful actions to restrict the God-given rights of the people it is supposed to serve, went viral back in April. Just this past weekend, Robinson attended a pro-gun rally on Saturday that opposed the Communist ideology of David Hogg and his handlers at the Florida state capitol in Tallahassee. His epic speech has the same goal as the young people who were aligned with Hogg, the saving of our young people’s lives, but his solution was a biblical, lawful and constitutional solution.

Robinson has not changed his message since April. Back then he told his city council, “It seems like every time we have one of these shootings, nobody wants to put the blame where it goes, which is at the shooter’s feet. You want to turn around and restrict my rights…You want to restrict my right to buy a firearm and protect myself from some of the very people you are talking about in here tonight. The law abiding citizens of this community, of other communities we are the first ones taxed and the last ones considered.”

“I’m the majority,” he added. “I’m a law-abiding citizen who has never shot anybody. Never committed a serious crime. Never committed a felony. I’ve never done anything like that. It seems like every time we have one of these shootings, nobody wants to put the blame where it goes, which is at the shooter’s feet. You want to put it at my feet. You want to turn around and restrict my rights.”

This past Saturday, Robinson stood at the Floria state capitol and proclaimed liberty and the exercise of the God-given rights of the American people was the answer to the problem of school shooters.

Robinson addressed comments made on his social media page that asked, “When was America ever great?”

“When the founders of this nation, ordinary men and women stood up and fought the mightiest army in the world to secure our freedom,” he added. “That’s when America was great!”

He then went on to recount some famous battles that were fought in American history, including Gettysburg, Fredericksburg, Antietam. While I disagree that those battles were the result of slavery nor did they actually end slavery, but just made virtually every man a slave to the federal government.

Robinson then went on to point out the greatness of America at D-Day, the Battle of the Bulge, Iwo Jima, as well as other wars that were fought against Communists and Nazis.

In dealing with all of this there is a common thread that runs through each of the accounts that Robinson expressed in our history: guns. Guns not only defeated tyrants, but were used to secure the liberty that was won.

Robinson said that he talked loud because he wanted everyone to hear him.

“It is time for the law-abiding citizens in this country to get as loud and proud with their message as the Left has with their lies,” he began.

He then spoke about the young people who had been protesting in the March for our Lives event that day. Robinson said that he listened to them as they spoke, and all that he heard was repetition from them about “statistics and this and that,” and he pointed out that all those were probably given to them “by some Communist, some Leftist, some Socialist.”

However, Robinson reminded his hearers that there is an element in all of it that many forget: Common sense.

“The world is made up of predator and prey.”

“Prey is defenseless,” he said. “Predators are not.”

“We can defend ourselves from predators because our God in Heaven endowed us with the inalienable right to arm ourselves with whatever we see fit to protect ourselves whether it be from criminals or a “government or whatever it may be,” said Robinson. And the one thing these children do not understand is the world is not made of rainbows and lollipops.”

“There are people right here close to this state house that will cut your throat for a dollar, and they’ll do it for sure if you don’t have a way to defend yourself,” he added.

Speaking to the kids, he said they needed to not only wake up, but “wake up quick,” echoing sentiments I’ve stated following the Parkland, Florida shooting back in February. The kids at the forefront such as David Hogg are nothing more than ignorant children who don’t know history and don’t know they are being used to disarm not only law-abiding American citizens, but make themselves prey for a predatorial government that is seeking to control them.

Listing off such tyrants such as Lenin, Stalin, Hitler, Mao and Castro, he pointed out that they all went for the guns of the people.

Robinson acknowledged that the Second Amendment has been diminished enough, and I’d say largely by the compromise of some Second Amendment groups like the National Rifle Association over the years. However, we cannot stand and allow it to be diminished more because if we do, as Robinson points out, “the forces that want to will come in and destroy it and wipe it away, and once it’s gone, guess what’s gonna be silenced next?”

It won’t be just your guns, “it’s gonna be your mouth, your opinions, your thoughts,” Robinson warned. “It’s all gonna be shut down.”

Then, Robinson went there. Yep, he exposed the mindset of those who are just fine with murdering the innocent in the womb in the most barbaric and brutal ways and said, “If they are willing to kill the most innocent and defenseless among us, what do you think they’ll do to their enemies that are trying to stand up against them?”

“When folks like that tell you you don’t need a gun, guess what you need?” he said rhetorically. “You need a gun.”

Robinson also took on the issue of open borders and pointed out that by allowing everyone in unvetted and unchecked, drugs, crime, corrupt politicians and more will follow them into this country and those supporting such notions are crying that we don’t need AR-15s and the like, but that’s exactly what will be needed by allowing such people into the country.

He then pointed out something very important because stupid people like CNN’s Chris Cuomo think our rights come from government. Robinson said the Second Amendment doesn’t give us any rights. Rather, it affirms our rights. Amen!

“Make no mistake about it, our Father in Heaven endowed us with those rights,” he said, pointing towards Heaven.

He then listed several animals in Creation that God had given special “weapons” to defend and feed themselves.

However, when it comes to man, God gave intellect and through that intellect, man produces machinery, and some of that machinery comes in the form of guns, as well as other objects and vehicles, including tanks, ships and jets.

While he warned those seeking to go after Americans’ guns that he was not giving an inch, he pointed out that when gun confiscation happened in countries, it didn’t take place instantly but developed over time on the “slippery slope.”

Robinson said that the gun owners in America are a “giant elephant” and there’s only one way to take down a giant elephant, one bite at a time.

That’s what the media and corrupt, Socialist and Communist politicians are doing. They are taking a bite at a time, and sadly, some who take your money and claim they are upholding and defending your rights, are often doing the direct opposite.

“But in this case, my brother,” said Robinson, “It’s one right at a time. So, we got to hold onto each and every one of those rights and make sure we don’t give an inch on this Second Amendment because anybody that can’t see what’s happening is either blind, dead or a fool.

The only way those who seek to overthrow our country will be able to do it is by taking away our ability to defend ourselves against their tyranny.

Robinson encouraged his hearers to do what he’s been doing, standing up for your rights. May God bless you as you do so.

Watch the full speech below.