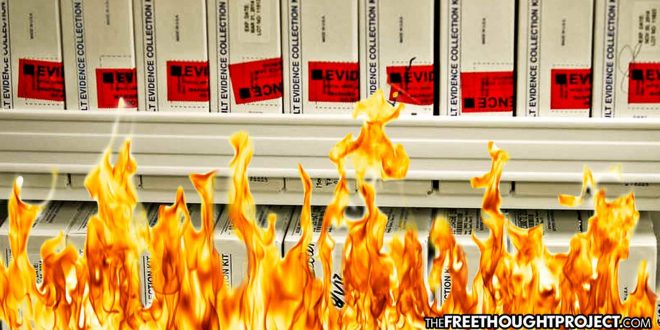 Plymouth, MN — Illustrating the careless and utterly ineffective nature of many police departments in the United States is the fact that rape kits go untested from coast to coast. However, one recent and particularly egregious case out of Minnesota shows just how brazen police can be in ignoring rape victims. Police in Plymouth, Minnesota aren’t just ignoring the rape kits, they are destroying them without investigation.

For those who may be unaware, after being raped, victims are subject to more humiliation by having to undergo DNA evidence testing in the form of a rape kit. Thinking that this will help catch their abuser, most victims undergo these tests.

When one woman — who wishes to remain anonymous — walked into the Plymouth police station after being brutally raped, she underwent this humiliating experience in an attempt to catch her rapist. After providing the rape kit, she assumed police would investigate it.

However, they did not. Not until nine years later did this woman find out police never sent the kit to the lab and instead destroyed it. As a result, the rapist went on to beat and rape many more victims. He would eventually get caught in Colorado and now sits in jail. But this predator could’ve been caught years earlier had it not been for these criminally negligent cops.

“They could have stopped him,” said the woman. “But I went through all of that for nothing. That is the worst feeling in the world.”

According to a report out of KARE 11, this woman is not alone and departments across the state have destroyed hundred of kits.

Even though Minnesota recently received a $2 million federal grant to DNA test the state’s backlog of thousands of untested rape kits, a KARE 11 investigation has found that more than 220 kits will never be tested because they’ve already been destroyed.

Overall, police agencies across the state destroyed more than 450 rape kits in unsolved and uncharged cases. Legal experts told KARE 11 it would be almost impossible to bring charges in a case involving a destroyed rape kit.

Regardless of whether it was tested, due to the wording in a state law passed 20 ago, KARE 11 discovered that destroying a rape kit likely starts the statute of limitations on when a case can be prosecuted. That can keep victims in the cases from ever seeing justice, even if new information surfaces.

“What you’re discovering is that these statutes of limitations are going to be a detriment to victims because somebody destroyed the kits,” said DFL Rep. Kelly Moller.

History shows that when these kits are investigated, rapists are caught. It’s that simple. So, the negligence and complacency in refusing to investigate these rape kits borders on criminal behavior, especially considering what happens when police actually investigate them. As TFTP reported last year, lawmakers across the country have set out to shift the “culture” of ignoring rape kits—and it is working.

As a result of this movement, according to law enforcement officials, more than 1,000 arrests and hundreds of convictions have been made from testing the backlog of kits going back months, years and, in some cases, decades.

According to the AP, the Justice Department has also allocated $154 million to help in clearing the backlog of kits as well.

Until this policing for profit paradigm shifts, we can expect to see other massive backlogs continue to pile up and be destroyed. Sadly, law enforcement in America often chooses profit over people. Tens of thousands of raids on people for suspected illegal substances take place every year, while hundreds of thousands of rape kits collect dust in police departments across the country.

If you were murdered today, there’s only a 60% chance of police catching the person who did it. That number drops to 3% if you’re raped. 50 years ago, that number was much higher. What happened?

The answer to that question can be found by looking at where police allocate much of their time and resources.

This decline is in spite of there being far fewer murders. It is also in spite of new technological developments to help police solve crimes, like DNA testing, advanced forensic labs, and unethical surveillance state technology.

Despite the near complete erosion of the constitutional protections against unlawful search and seizure, the clearance rate for murder continued its free fall. This highlights the fact that no matter how many rights are given up or freedoms diminished, police cannot guarantee your safety — or even solve a potential crime if it happened to you.

While police are failing to investigate murders, the rate at which they are ignoring rape is nothing short of criminal.

Every 98 seconds, someone is sexually assaulted in the United States.

According to the Department of Justice, there are hundreds of thousands of untested rape kits collecting dust in police evidence rooms nationwide, and many other estimates suggest that this number could be as high as one million.

As a result of this horrific negligence, roughly 3% of rape cases in America are actually solved. This is in spite of the fact that many rape kits have a high chance of leading to an arrest since most rapists are career criminals who have their DNA on file.

In some cases, the victims even know who their attackers were, but they can not prosecute these criminals because the evidence has yet to be processed by police.

The hundreds of convictions mentioned above illustrate what happens when police go after actual criminals instead of people who choose to partake in substances deemed illegal by the state. Sadly, however, it has taken hundreds of millions of dollars in incentives for police to finally prosecute these actual criminals and the victims who attempt to hold them accountable are still being ignored.

“I’m shocked, and nothing around the lines of sexual assault cases should shock me anymore,” said DFL Rep. Kelly Moller, a prosecutor who has worked on sexual assault reform in the legislature. “It is very upsetting to know that these kits have been destroyed and really eliminating the chance for justice for these survivors.”