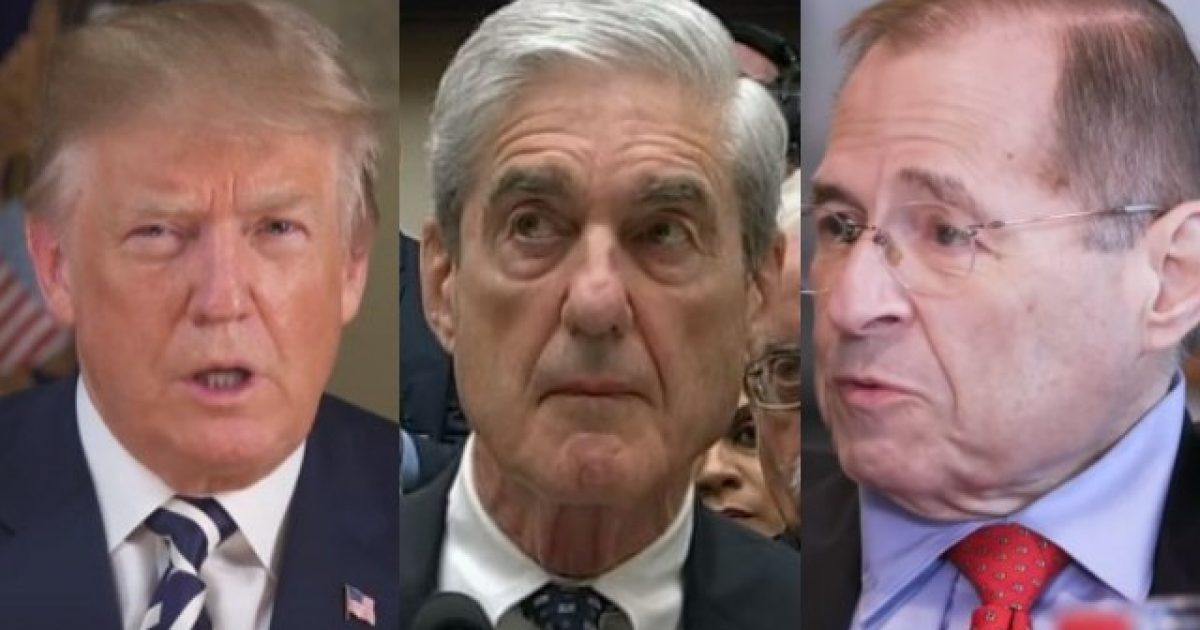 Calling someone a liar is a pretty powerful thing, but sometimes it’s justified. This is one of those times.

On Friday, in an attempt to justify continued efforts at pretending to impeach President Donald Trump — because the reality is, it’s not going to happen at this juncture — House Judiciary Committee Chairman Jerrold Nadler claimed in an interview with friendly media that former special counsel Robert Mueller said something he didn’t on Wednesday regarding alleged ‘crimes’ by the president.

“We are continuing an investigation of the president’s malfeasances,” Nadler said, indicating the charade would continue through the August recess and beyond because the lunatic Left-wing “AOC Plus 3” faction now controls Democrat policymaking. “He [Mueller] told us that Donald Trump obstructed justice.”

“We will continue to seek testimony from key fact witnesses,” he continued. “The Committee has authorized several additional subpoenas. Our work will continue into the August recess and we will use those subpoenas, if we must.”

Nadler is lying, flat out. Mueller said no such thing.

In fact, Mueller said just the opposite.

As noted in a tweet from ABC News, Rep. Doug Collins (R-Ga.) asked Mueller, “At any time during the investigation, was your investigation curtailed or stopped or hindered?”

We already know there was no criminal collusion or conspiracy because Mueller stated that fact plainly in his report to the Justice Department earlier this year. So if his probe was not hindered in any way by White House or anyone else, then we can’t very well have a crime of obstruction by the president, can we?

Rep. Doug Collins: “At any time during the investigation, was your investigation curtailed or stopped or hindered?”

That said, it was that very lack of evidence that drove the Mueller Democrat donor hacks to conclude that they could not formally charge POTUS with obstruction because there was simply no evidence for it.

“We did not reach a determination as to whether the president committed a crime,” Mueller said, clarifying a previous Office of Legal Counsel memo summarizing the final report, Vice News tweeted.

“We did not reach a determination as to whether the president committed a crime.” – Mueller clarifies previous OLC memo statement https://t.co/EGINyEtL5a

It’s bad enough that Nadler was able to lie like this and get away with it unchallenged, but we’ve come to expect that from the garbage that passes as the Washington media.

But his pathological inability to be honest is creating additional unnecessary tension and harm throughout the country. It feeds into the #neverTrump rage of conspiracy nut jobs, wackos, sickos, and wannabe anarchists though this president hasn’t done a damned thing wrong. Period. In fact, he may well be the most honest president we’ve had in generations. Or ever.

The House dismisses for its summer/August recess on Friday. Good. Good riddance. As the GOP-controlled Senate is able to do some good for the Trump White House by getting the president’s judicial picks, constitutionalists one and all, approved to the federal bench to offset the Obama and Democrat-aligned judicial activists, the Democrats are running the House like it’s one big presidential investigatory body, the country’s business — border security, infrastructure, entitlement reform, repealing healthcare regulations, and neutering federal agencies — takes a back seat.

It’s sickening, really, but lunacy is the Democrats’ business these days.

And business is good.