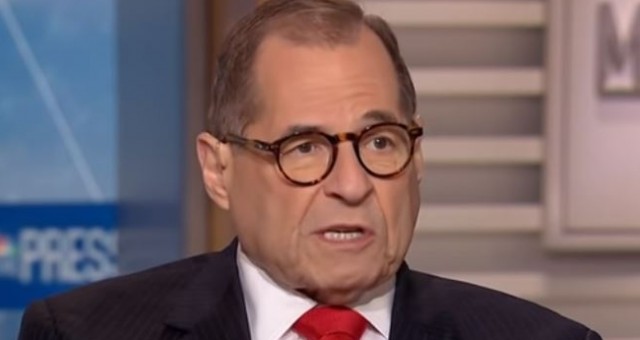 Democrats are a sad bunch and the saddest of them all, though it is a tight race with Rep. Adam Schiff, is Rep. Jerry Nadler.

The Democrats, led by House Speaker and California Rep. Nancy Pelosi and Reps. Nadler and Schiff, have done everything in their power to try and destroy President Donald Trump.

They insinuated that his election was not legitimate because of Russian interference, that he was violating the Emoluments Clause of the Constitution that no one heard of until they started talking about it, and now they have moved on to the Ukraine.

Then on Sunday, in act of desperation because he knows that impeachment is doomed to fail in the Senate, Rep. Nadler made another dire prediction.

In the most recent case of the sky is falling hyperbole, the New York representative said he is uncertain that the 2020 election will be legitimate if the Senate does not convict President Trump.

“[Trump] poses a threat to the integrity of the next election if he’s allowed to continue to do what he’s doing,” Nadler said.

“This is a matter of urgency to deal with because we have to make sure the next election is conducted with integrity and without foreign interference,” he said during an interview on “Meet The Press” on Sunday.

That is when liberal host Chuck Todd, who has proven to be nothing more than a stooge for the Democrat Party, asked him if the United States could “have a fair election in 2020” if the president is not convicted.

It was the softball setup question that Rep. Nadler had been waiting for and he spiked it right on cue.

“I don’t know. The president, based on his past performance, will do everything he can to make it not make it a fair election. That’s part of what gives us the urgency to proceed with impeachment,” he said.

Do not believe that for one second. The urgency now is a race against the clock because the Democrats know they have no one that has a chance of defeating President Trump.

And if they cannot defeat him, they want to place an asterisk on his entire presidency. An asterisk known as impeachment.

But the reality is that Democrats from Reps. Rashida Tlaib, Ilhan Omar and Alexandria Ocasio Cortez, all the way to Reps. Maxine Waters and Al Green, have been shouting for impeachment from the day Democrats took control of the House of Representatives.

With the cavalcade of crazy they have at the head of their primaries they know they need an ace in the hole to defeat a president who has the economy booming and jobs coming back to the United States.

There is no one in that party that President Trump would not tear to shreds, and what is happening now is a last-ditch effort to do anything to wrest power back.

Because, at the end of the day, that is what this entire thing is about. The thirst for power. And Democrats want that power back by any means necessary.