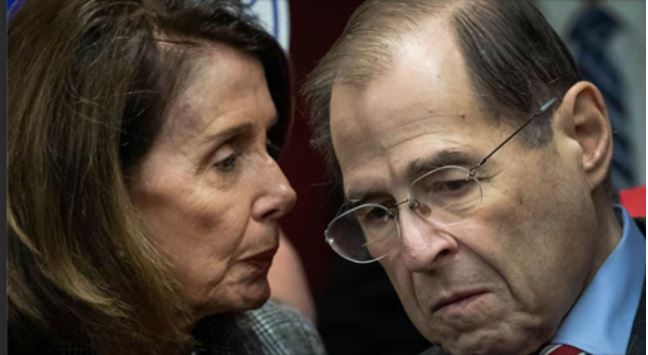 Opinion| Mark Sidney| I have to admit, I am getting pretty excited about the new course that the Trump admin has begun to chart ever since impeachment.

For far too long Trump, and those of us seeking to restore American exceptionalism through a MAGA platform, have been the ones taking the punches, now, it seems that we are finally getting our chance to land some of our own.

As we reported earlier, one of the President’s lawyer, Rudy Giuliani, has been collecting evidence of Ukrainian/American corruption by bad actors in the previous administration.

As of yesterday it is being reported that AG Barr is now in possession of Rudy’s files and is sorting through them in order to see if the leads are legit or not.

I’m guessing that the Dems know what Rudy has and they also know that if a honest prosecutor gets his hands on that evidence, those who were doing dirt in Ukraine are going to be in deeeeeeep ****.

Democrat Rep from New York, Jerry Nadler, has sent a letter to Barr demanding to know what the Attorney General would dare to receive evidence from an officer of the court (Rudy Giuliani Esq) ‘outside of the normal channels.’

-“Whether or not you are in league with Mr. Giuliani and his associates, DOJ guidelines and regulations exist to protect you and the Department from even the appearance of a conflict of interest or any impropriety,” Nadler wrote, referring to allegations by Giuliani associate Lev Parnas that Barr was involved in the scheme to dig up dirt on the Bidens in Ukraine.

-“Given your creation of a new “intake process” for Mr. Giuliani, it is all the more important that you provide a complete explanation for your decision to sidestep standard Department practice,” he added.

“The Justice Department has the obligation to have an open door to anybody who wishes to provide us information that they think is relevant,” Barr told reporters. “But as I did say to Senator [Lindsey] Graham … we have to be very careful … with respect to any information coming from the Ukraine.”

Barr said reliable information is difficult to find because there are “a lot of agendas” in Ukraine and “a lot of cross currents.”

“We can’t take anything we receive from the Ukraine at face value,” Barr said. “For that reason, we had established an intake process in the field so that any information coming in about Ukraine could be carefully scrutinized by the department” to assess its credibility.

He added: “And you know, that is true for all information that comes to the department relating to the Ukraine, including anything Mr. Giuliani might provide.”’

Watch the video below and you will see how skeptical Barr appears to be about any information coming out of Ukraine.

Now contrast this with how eager the Obama’s admin was to run with an opposition research dossier from Russian intel sources in order to open up a spying operation on Trump’s advisors, and likely Trump himself.

Attorney General Bill Barr confirms to @PierreTABC that the Justice Department is reviewing documents about Joe Biden provided by Rudy Giuliani from Ukraine, but offers a note of caution about the origin of the materials: “We have to be very careful.” https://t.co/UYkHEiZq8F pic.twitter.com/iYHSDwnaM7

This will be Barr’s big test. If he does not hit pay dirt on this Ukraine info or on the Durham investigation, I will lose all my faith in the DOJ and Federal law enforcement leadership (not the everyday agents who are likely more upset about this than I am).

I pray that Barr has what it takes to get this done. I guess only time will tell.