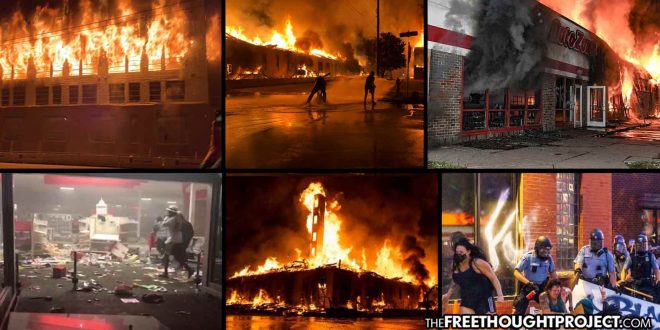 Minneapolis, MN — In response to the death of George Floyd, TFTP reported on Wednesday that protesters took to the streets to voice their anger. The overwhelming majority of that anger on Tuesday night — which resulted in property destruction — was directed at the third precinct police department as protesters smashed cop cars and threw rocks and bricks at the department. On Wednesday, however, rioters began targeting property that had nothing to do with the death of George Floyd. Now, the military is being called in.

In reaction to the riots in Minneapolis, a source has confirmed to KSTP that the city requested support from the National Guard late Wednesday night to combat any further destruction.

The situation near Lake Street and Hiawatha in Minneapolis has evolved into an extremely dangerous situation. For everyone's safety, please leave the area and allow firefighters and paramedics to get to the scene.

On Wednesday night, a handful of rioters broke off from the main protests and began setting an Auto Zone store on fire. The store was looted as the rioters moved on to other locations and set them ablaze as well.

A Target spokesperson made the following statement in regard to the store burning down, “We are heartbroken by the death of George Floyd and the pain it is causing our community. We decided to close our Lake Street store earlier today and worked to ensure all of our team members were accounted for and safe. Our focus will remain on our team members’ safety and helping our community heal. Until further notice, our store will remain closed.”

In the early morning hours, Mayor Jacob Frey, who has openly called for the arrest of the officers involved in the death of George Floyd, asked residents to please calm down, noting that “we cannot let tragedy beget more tragedy.”

The area along Lake has become unsafe. We are asking for your help in keeping the peace tonight. https://t.co/kRZuWGJY29

This request fell on deaf ears and as the morning progressed, restaurants and even apartment buildings — people’s homes — were set on fire.

An entire housing complex was seen engulfed in flames and was on the verge of collapse, according to those on the ground.

Housing complex construction site on 29th/26th is on the verge of collapse. Heat is so intense you can feel blocks away. pic.twitter.com/sXbmQyzHCz

On top of the fires, officers in the area also found a man in grave condition on the sidewalk and began CPR. The man had been shot and the crowd reportedly blocked an ambulance attempting to get to the area. By the time ambulance made it through, however, it was too late. The man was pronounced dead at the Hennepin County Medical Center.

Minneapolis police spokesperson John Elder went so far as to praise the protests Tuesday night which destroyed multiple police vehicles and the front of the third precinct building, calling them “great.” However, he says Wednesday night went too far.

“Tonight was a different night of protesting than it was just the night before,” said Elder. “The night before, we started out with about 8,000 protesters at 38th and Chicago. They were great. They were chanting for things to remain peaceful.”

It is important to point out that the anger these rioters feel is real. While many Americans are able to sit behind their computer screens and TVs and watch this unfold, the folks in Minneapolis have been pushed to a breaking point. People are tired of watching cops kill unarmed and often innocent people only to keep their jobs and pensions while the taxpayers of these cities take the brunt of the responsibility.

For decades there has been a perfect storm brewing in this country as minorities and poor people have their doors kicked in and are terrorized by cops during botched raids for substances deemed illegal by the state and watch helplessly as their family members die in video after video at the hands of cops. Now, we have record unemployment, lockdowns, cops murdering people on video and facing no immediate charges, and those in charge sit at the top and point fingers.

So, why we would never condone the destruction of private property to make one’s point, we understand the anger and helplessness felt by those who would.

It is important to note that the destruction to property and senseless violence will undoubtedly sway people away from the much needed anger directed at the system that led to the death of George Floyd. Unfortunately, the very small group of people responsible for this destruction will be used to discount the entire peaceful nature of the rest of the protests.

This is tragically unfortunate because Floyd’s death, while similar to so many other police killings, received a response from all sides like never before.

In one of the most incredible connections of the two-party divide we’ve ever seen, Floyd’s death enraged not only the Black Lives Matter folks and the left — who are always willing to go to bat for those killed by police — but conservatives, who consistently apologize for killer cops, had finally taken a stand as well. For once, Americans were becoming united in the face of police brutality and it was crossing party lines.

A united front of people pushing for government and police accountability would be an unstoppable force for good.

Hopefully, the destruction of property in Minneapolis does not serve as a snooze button on the alarms of those on the right who’ve finally awaken to the standing army our forefathers warned us about.