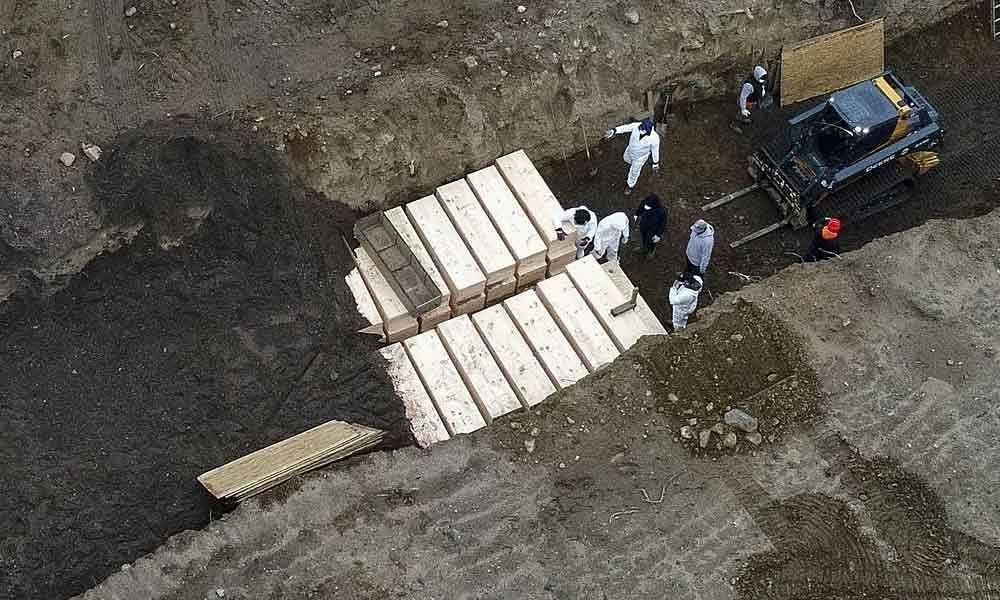 (Natural News) Drone footage has spotted workers wearing hazmat suits burying dozens upon dozens of caskets in a mass grave in Hart Island, in northeast Bronx, New York City. The use of personal protective equipment suggests that the bodies are COVID-19 victims.

The drone footage was produced by Melinda Hunt, the founder of the Hart Island Project, a nonprofit organization whose mission is to document the burials that take place on the island and provide low-income families with assistance in retrieving deceased relatives who were possibly buried there.

The footage was taken on Thursday, showing around a dozen contracted laborers digging long, narrow trenches using excavation machines. The dead were wrapped in body bags and carefully placed inside pine caskets with their names scrawled in large letters on the lid.

Historically, New York City has used Hart Island to bury people with no known next of kin since 1868, when the city purchased the island from a private individual. It’s estimated that more than a million unclaimed and unidentified bodies have been buried there since. Under normal circumstances, around 25 bodies are buried there once a week by low-paid prison laborers from Riker’s Island, the city’s main prison complex.

However, ever since the COVID-19 pandemic started hitting the city hard, the number of burials has increased dramatically. Sources have told journalists that around two dozen bodies are buried there every day, five days a week. Furthermore, for “social distancing and safety reasons,” the city has decided to employ contract workers instead of prison laborers to bury the bodies.

New York City will start burying bodies that haven't been claimed for more than 14 days in mass graves on Hart Island.

The city's morgues are short on space as it fights the coronavirus pandemic. pic.twitter.com/5dUeCn6u1j

New York City Mayor Bill de Blasio confirmed in a press conference that the bodies of coronavirus victims who haven’t been claimed must be buried at Hart Island, as the city deals with dwindling morgue space due to experiencing the deadliest outbreak of COVID-19 in the United States.

In fact, under a new policy, New York City’s Office of the Chief Medical Examiner (OCME) will be keeping bodies of COVID-19 victims in storage for only 14 days before they’re given to prison laborers to bury on Hart Island.

A spokesperson for the OCME has warned that more coronavirus victims may be “temporarily interned” in Hart Island if the city’s capacity to store bodies reaches past breaking point.

The OCME says it can store around 800 to 900 bodies in its buildings and has room for 4,000 more in around 40 refrigerated trucks it can dispatch around the city.

“We’re all hoping it’s not coming to this,” said Kersten. “At the same time, we’re prepared if it does.”

Many in the city were outraged last week after public officials sparked a panic when they claimed that some of New York City’s deceased would have to be temporarily buried in other public parks across the city – possibly even Central Park. This claim was quickly dismissed by New York City’s Parks department. However, if things continue to escalate and city officials possibly run out of space on Hart Island, it’s only a matter of time until they dig a new mass grave somewhere else.