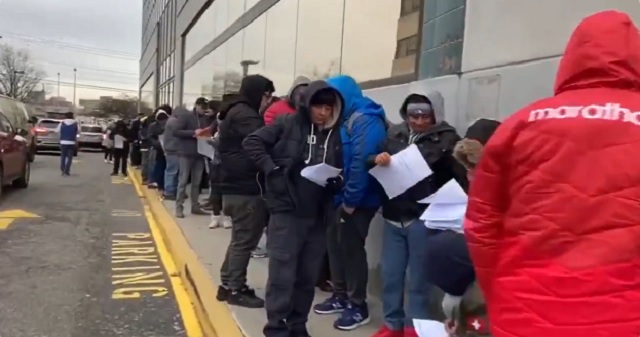 Lines to apply for New York driver's licenses go as far as around the block on the first day undocumented immigrants can apply for them https://t.co/ez6Ca3jxbe pic.twitter.com/7ogsYdTPDb

From The Hill, “NY to begin offering driver’s licenses to undocumented immigrants after judge strikes down challenge”:

A federal judge on Friday denied a challenge to a law that will allow New York to give driver’s licenses to undocumented immigrants.

The law, which is set to go into effect next week, was facing its second challenge in court, the Rochester Democrat & Chronicle reports.

U.S. District Judge Gary Sharpe ruled against Rensselaer County Clerk Frank Merola, saying he lacked the legal capacity to bring the lawsuit against the state over the new law.

[…] The law allows immigrants to use foreign-issued documents to prove their identity and age, and would not require a valid Social Security number to obtain a driver’s license in the state.

New York Attorney General Letitia James hailed the judge’s decision, noting that it was the second time a judge has dismissed challenges.

“We expect all public officials to comply with the law, and, as the state’s attorney and chief law enforcement officer, I will continue to vigorously defend it,” James said in a prepared statement.

WOW! Hundreds of people lined up outside the Brooklyn DMV office to apply for driver’s licenses on the day that the new #GreenLightNY law takes effect. @MaketheRoadNY @GreenLightNYDT pic.twitter.com/66KAAgbt9F

Scenes from DMV in The Bronx, Queens, and Staten Island for Driver’s Licenses. What a beautiful day! #GreenLightNY #SiSePudo pic.twitter.com/UVFDZqkPsF

A law allowing illegal aliens to get driver’s licenses in New Jersey was also just passed.

New Jersey passed a bill giving undocumented people access to driver's licenses and ID cards. It heads to the governor, who says he supports it.

Immigrants marched to the statehouse today, after a 2-year fight for the "right to drive without fear of ICE detention." pic.twitter.com/hPRwP7dRSW

The moment when hundreds of New Jersey immigrants, after 18 years of fighting, learned that they had finally won #LicensesForAll! pic.twitter.com/BM9jBsC5O7

As a reminder, NY AG Letitia James after she was elected in 2018 promised to “use every area of the law” to prosecute President Trump, his family and “anyone in his orbit.” While the President of the United States is run through the wringer, illegal aliens are given drivers licences and allowed to operate above the law.