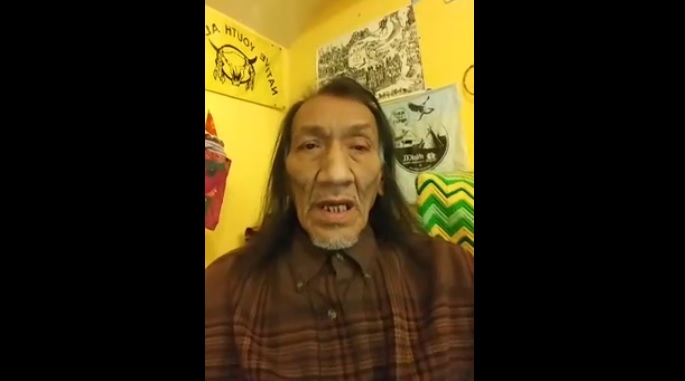 Newly surfaced video shows Native American activist Nathan Phillips explicitly claimed he was a “Vietnam Vet” — not merely a “Vietnam times veteran” or a “Vietnam veteran times” as he’s stated in the past.

In a video Phillips shared to his Facebook page on January 3, 2018, he stated plainly, “I’m a Vietnam Vet.”

“I served in Marine Corps 72 to 76,” he said. “I got discharged May 5, 1976. I got honorable discharge and one of the boxes shows peacetime or, what my box says is that I was in theater. I don’t talk much about my Vietnam times.”

"I'm a Vietnam Vet. I served in Marine Corps 72 to 76. I got discharged May 5, 1976. I got honorable discharge and one of the boxes shows peacetime or, what my box says is that I was **in theater**. I don't talk much about my Vietnam times." pic.twitter.com/nIoYxGoPqM

More Phillips:
"I got a relation. A sister, or a niece, she gave me that Vietnam colors flag. You know the yellow, red, black one with some tobacco on there. She wanted me to carry it around because you know her dad, a Vietnam vet too like that." pic.twitter.com/aZGuVAiHwx

He made the claim multiple times on the same stream and solicited donations:

"Oh yes I would love to have a sponsor for the walk… We have a post office box people can send gift cards and like that, any kind of donations, you can make checks out to Native Youth Alliance or Nathan Phillips." pic.twitter.com/yLi4N8t4EK

Here's the post with the "Vietnam War Veteran" medallion in context, posted to his page on Veterans Day 2018. pic.twitter.com/JJ0HAwYRjh

Also fact check "I don't talk much about my Vietnam times" is extremely false.

The timing for this to come out is absolutely hilarious considering the Washington Post several hours before ran an article with the assertion that “there’s no evidence that [Phillips has] ever claimed to have served in Vietnam.” Lamothe acknowledged the video on Twitter but The Post had yet to update their article as of 1:21 AM EST on Thursday.

This video shows Nathan Phillips making statements that simply are not true. https://t.co/Cmo44AyDSq

As I reported yesterday, the first reporter to break the story of Phillips and the Covington Catholic students’ interaction, Indian Country Today’s Vincent Schilling, stealth-edited his viral article on the incident to erase claims about Phillips’ alleged service in Vietnam:

Are you going to explain how your story changed? You said he was a "Vietnam veteran," now you say he's a "Vietnam-era veteran."

Did he tell you he was a Vietnam veteran or not? https://t.co/lT0CDmFVUO pic.twitter.com/lrFibY6uJw

Yes absolutely I did edit it to reflect the fact that when I wrote this article ten years ago, I misunderstood the situation in which he was spit on.

I changed it after receiving an email alerting me – this is why the article reflects "edited" I am not trying to hide this fact.

Retired Navy SEAL Don Shipley obtained Phillips’ military records and it reportedly showed he was trained as an electrician and worked as a refrigerator mechanic stateside in Lincoln, Nebraska and later moved to a marine base in El Toro, California where he “went AWOL a few times.”

As Cassandra Fairbanks at The Gateway Pundit reported on Tuesday, $6,000 was raised as part of a GoFundMe campaign to make a film about Phillips which included the claim that he was a “marine in Vietnam.”