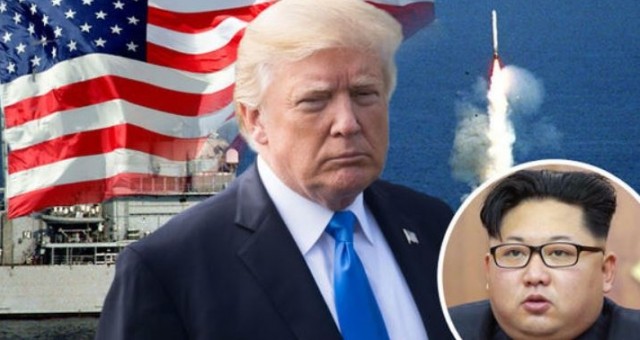 The North Korean foreign ministry said on Tuesday that Washington would decide what “Christmas gift” it would receive if the United States fails to change its “hostile policies” on denuclearization before the end of the year, according to the state-run Korean Central News Agency.

Ri Thae Song, North Korea’s vice minister of foreign affairs in charge of relations with the United States, warned of an approaching end-of-year deadline, saying that President Trump’s recent calls for more talks is “nothing but a foolish trick hatched to keep the DPRK bound to dialogue and use it in favor of the political situation and election in the U.S.,” Reuters reported.

One major challenge looming in the next few weeks comes from nuclear-armed North Korea, which test-fired two short-range missiles on Thanksgiving. The sanctions imposed by Trump and previous presidents – as well as the United Nations and other individual countries – are designed to get the North to abandon its nuclear weapons and long-range missile programs. Kim has made gestures but has never agreed to full and verifiable denuclearization.

North Korea’s demands have shifted several times over the last few months. For now, what Kim is demanding is clear: before his regime sits down for any new talks with the Trump administration on possible North Korean denuclearization, Kim wants America to end its so-called “hostile policy.”

Working-level talks held in Sweden in October broke down over what the North Koreans described as the Americans’ “old stance and attitude.”

Ri Thae Song, a vice foreign minister handling US affairs, accused Washington of repeating talk offers aimed at buying time without offering real solutions. Ri reiterated earlier North Korean statements that the country has no intentions to continue the nuclear diplomacy unless it gets something substantial in return.

“The dialogue touted by the US is, in essence, nothing but a foolish trick hatched to keep the DPRK bound to dialogue and use it in favor of the political situation and election in the US. What is left to be done now is the US option and it is entirely up to the US what Christmas gift it will select to get.”

Kim has said he would seek a “new path” if the United States persists with sanctions and pressure. The North has tested a series of new solid-fuel missile systems in recent months, which experts say potentially expands its ability to strike targets in South Korea and Japan. It has also threatened to lift a self-imposed moratorium on nuclear and long-range missile tests and resume launches over Japan.