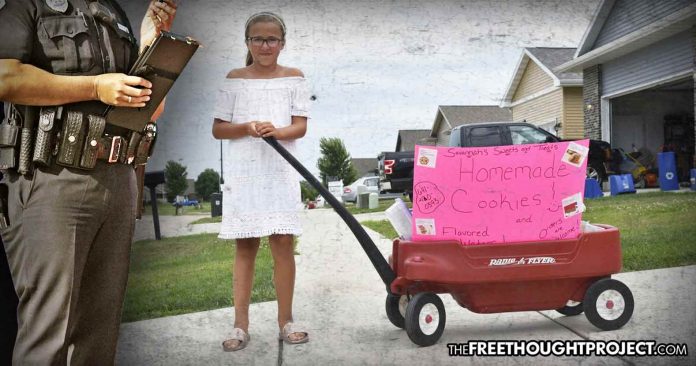 Cedar Falls, IA – As the Free Thought Project reported last month, 2018 is turning out to be the summer of the snitches as neighbors turn in fellow neighbors to authorities for selling water, lemonade, or for simply being black at your own apartment complex pool. This see something say something society is the wet dream of the authoritarian and as a recent case of a girl selling cookies out of Iowa illustrates, it is showing no signs of slowing.

One would think that in the ostensible land of the free, a little girl selling cookies to raise money over the summer would never be an issue over which people would call the police. However, one would be wrong.

Savannah Watters, a 10-year-old girl selling homemade cookies on her street became the subject of not one neighbor calling the police, not even two. In total, three of this little girl’s neighbors called armed men in bullet proof vests to report that a 10-year-old selling cookies is disrupting to their neighborhood.

“It was going really well,” said Savannah, until the cops showed up that is.

Neighbors claim the girl’s cookie stand was disrupting traffic, so they had no other option but to resort to the force of the state to solve this problem.

Apparently, simply walking over to the girl’s house and asking her parents to help solve the traffic problem was just too difficult and they were forced to bring in armed enforcers to do their bidding for them.

As WIRC reported, one of those neighbors tells CNN off camera that she called the police because she was worried about the traffic flow on the street and she was just trying to protect the safety of the children in the neighborhood, including her own, after her daughter was almost hit by a cookie customer’s car.

One of the callers wanted officers to do a welfare check to make sure there were proper supervision of the cookie entrepreneur and the other two callers were concerned about increased traffic in the neighborhood, WIRC reported.

“Well, we’ve got a little girl been selling cookies and water for four weeks and the traffic is getting to the point that they’re using our driveway to turn around, which is fine, but they almost hit my daughter,” the neighbor said. “I mean, it’s just adding. It’s getting out of control.”

Amazingly enough, and to their credit, the cops did not shut down the little girl’s cookie stand. Instead, after receiving the third call, they simply asked her to move it back to be less disruptive.

“On the third call, she was set up close enough to the 45 miles per hour speed zone street,” Olson said. “That kind of concern, the officer asked her to maybe go further back from the curb or maybe go into the driveway of her home.”

Savannah respected the cop’s request and moved the cookie stand back into her driveway. However, she said that move sent her cookie sales plummeting.

“I just wish we could have known first because we didn’t know anything, and it’s just hard to believe that they didn’t come talk to my mom,” Savannah said.

Savannah’s mother Kara said she thinks the fact that police were called for her daughter selling cookies is incredible. She, like TFTP, questions why the parents didn’t just come talk to her.

“I don’t want attention,” Watters said. “I am not a bad person and I am a good mom, and I would never risk, you know, and I didn’t know anything that anyone was bothered, and so I just wish they were to come to me instead of making it all of us you know all of this.”

Common sense, it seems, is a trait being replaced with dependency upon government. A slippery slope, indeed.