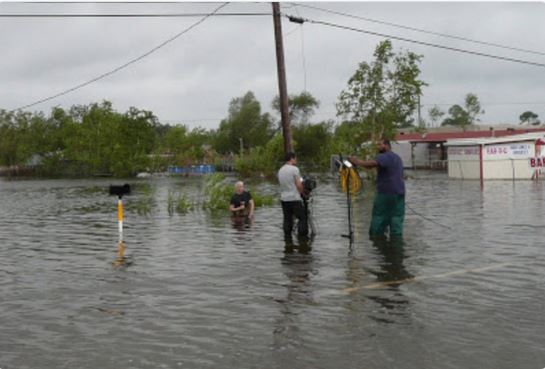 Yesterday morning, FOTM‘s DCG posted a video showing how the Weather Channel broadcasts fake news about Hurricane Florence by exaggerating how strong the wind is.

A reporter pretended to be unsteady on his feet, buffeted by the supposed strong wind. Alas, the video camera showed that right behind the reporter were two people casually strolling by.

I had a GIF made of the video in case YouTube takes it down:

But it’s not just the Weather Channel that is engaged in fake weather news.

CNN, too, faked its Hurricane Florence reporting, as shown in the pics below (source: Mark Dice).

The first pic is from CNN’s live footage of Anderson Cooper standing in the supposed deep flood waters up to his waist.

Notice, however, the camera man standing in shallow water just a few feet away.

Here’s a pic of the same flood waters taken from a different camera angle showing the same camera man and another CNN employee standing in shallow water.

Note: Snopes says the pics are actually of Anderson Cooper reporting on Hurricane Ike in 2008. If true, it just goes to show Cooper and CNN have been engaged in fake weather reporting for at least 10 years.

Here she is, paddling in a canoe, in seemingly deep flood waters.

Alas, her lie is revealed when two men casually slosh by, showing that the “deep flood” is only ankle deep.