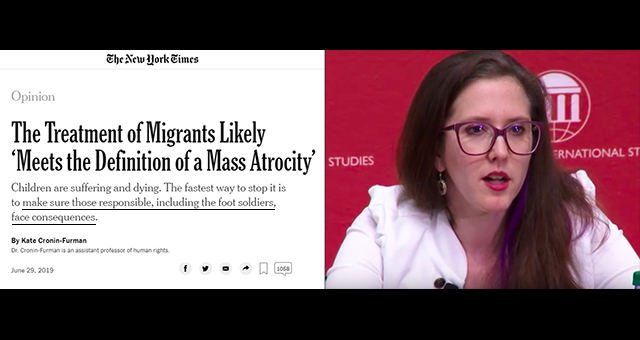 The New York Times ran a column over the weekend calling for leftists to go after US Customs and Border Protection agents “in their home communities” to force them to “face consequences” for their work at migrant detention facilities.

Kate Cronin-Furman, a purple-haired feminist who is an “assistant professor of human rights” at the University College London Department of Political Science, wrote in the New York Times:

Children are suffering and dying. The fastest way to stop it is to make sure those responsible, including the foot soldiers, face consequences.

Those of us who want to stop what’s happening need to think about all the different individuals playing a role in the systematic mistreatment of migrant children and how we can get them to stop participating. […]

The identities of the individual Customs and Border Protection agents who are physically separating children from their families and staffing the detention centers are not undiscoverable. Immigration lawyers have agent names; journalists reporting at the border have names, photos and even videos. These agents’ actions should be publicized, particularly in their home communities.

This is not an argument for doxxing — it’s about exposure of their participation in atrocities to audiences whose opinion they care about.

This is an argument for doxing, unless she doesn’t understand what doxing means. She’s calling for harassing Border Patrol agents — most of whom are Hispanic — at their homes and smearing them as genociders.

She goes on to compare hundreds of thousands of migrants voluntarily choosing to invade our country to the Holocaust:

The knowledge, for instance, that when you go to church on Sunday, your entire congregation will have seen you on TV ripping a child out of her father’s arms is a serious social cost to bear. The desire to avoid this kind of social shame may be enough to persuade some agents to quit and may hinder the recruitment of replacements. For those who won’t (or can’t) quit, it may induce them to treat the vulnerable individuals under their control more humanely. In Denmark during World War II, for instance, strong social pressure, including from the churches, contributed to the refusal of the country to comply with Nazi orders to deport its Jewish citizens.

The midlevel functionaries who make the system run are not as visibly involved in the “dirty work,” but there are still clear potential reputational consequences that could change their incentives. The lawyer who stood up in court to try to parse the meaning of “safe and sanitary” conditions — suggesting that this requirement might not include toothbrushes and soap for the children in border patrol custody if they were there for a “shorter term” stay — passed an ethics exam to be admitted to the bar. Similar to the way the American Medical Association has made it clear that its members must not participate in torture, the American Bar Association should signal that anyone who defends the border patrol’s mistreatment of children will not be considered a member in good standing of the legal profession. This will deter the participation of some, if only out of concern over their future career prospects.

The individuals running detention centers are arguably directly responsible for torture, which could trigger a number of consequences at the international level. Activists should partner with human rights organizations to bring these abuses before international bodies like the United Nations Human Rights Council. They should lobby for human rights investigations, for other governments to deny entry visas to those involved in the abuses, or even for the initiation of torture prosecutions in foreign courts. For someone who is “just following orders,” the prospect of being internationally shamed as a rights abuser and being unable to travel freely may be significant enough to persuade them to stop participating.

When those directly involved in atrocities can’t be swayed, their enablers are often more responsive. For-profit companies are supplying food and other material goods to the detention centers. Boycotts against them and their parent entities may persuade them to stop doing so. Employees of these companies can follow the example of Wayfair workers, who organized a walkout on Wednesday in protest of their company’s sale of furniture to the contractor outfitting the detention centers. Finally, anyone can support existing divestment campaigns to pressure financial institutions to end their support of immigration abuses.

Many Americans have been asking each other “But what can we DO?” The answer is that we call these abuses mass atrocities and use the tool kit this label offers us to fight them. So far, mobilization against what’s happening on the border has mostly followed standard political activism scripts: raising public awareness, organizing protests, phoning our congressional representatives. These efforts are critical, but they aren’t enough. Children are suffering and dying. The fastest way to stop it is to make sure everyone who is responsible faces consequences.

I wasn’t exaggerating last year when I reported on how the most popular Resistance icons have been openly fantasizing about subjecting Trump supporters to show trials in the future if they ever seize back power.

Pretty much everything Cronin-Furman is advocating for is already happening with the full blessing of Corporate America and Big Tech.

Cronin-Furman wants our Border Patrol and ICE agents to be barred from the workforce and potentially tried for war crimes before international courts for the “crime” of trying to protect our borders.

Everything in her story is a made up fantasy, the border has never been more open and the overwhelming majority of migrants stopped are just booked and released throughout the country.

Fortunately, tons of her tweets were archived showing she harbors a deep-seated hatred for white people and especially white men, whom she wants to deny the franchise (and maybe even drone strike).