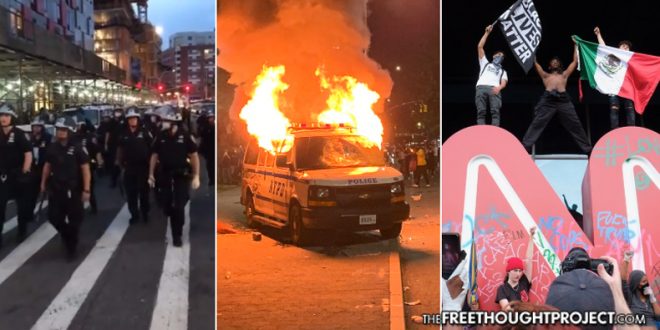 (ZH) With ongoing social unrest in Minneapolis, protests are unfolding across major US cities on Friday evening. From Washington, D.C. to New York City to Atlanta to Ohio to Los Angeles to San Jose, tens of thousands of people are marching on the street demanding justice for George Floyd, the man who was killed by Minneapolis Police on Monday.

“What didn’t happen in time to prepare… for angry, empassioned folks that were going to be protesting… we have to be better prepared.” – @JamesAGagliano to @AC360 #CNN pic.twitter.com/EHN8PTP9JW

CNN’s Fernando Alfonso reports the social unrest outside of his newsroom.

Police cars getting literally destroyed in Atlanta outside the CNN Center pic.twitter.com/x5zRxZVQpb

The Atlanta Journal-Constitution tweets several pictures of the chaos and destruction unfolding in downtown Atlanta.

It’s getting wild in Atlanta tonight.

In Washington, D.C., hundreds of protesters, if not thousands, have assembled outside of the White House.

The protest then headed to in front of the White House. A protester was taken by the USSS in front of Pennsylvania Ave into an adjacent federal building. Unclear what he did.A couple men then splintered off from the group and spray painted “F*ck Trump” on the building. @cbsnews pic.twitter.com/OVwPu0PF6X

#GeorgeFloyd Protest just outside of the White House. pic.twitter.com/SeZiRfiXT5

A protester climbed the fence of a federal building and spray-painted “Fuck Trump.”

At least one protestor spray painted graffiti on the bank building. pic.twitter.com/GSglZWAI18

WATCH: Secret Service tackles protester as fights break out in front of the White House at a #GeorgeFloydMurder protest in Washington, DC. pic.twitter.com/2P9parhFwX

Hundreds, maybe even thousands, are marching the streets towards the White House this evening.

Headed for the White House pic.twitter.com/Sw0m5bueZa

#NOW: On the fourth day of nationwide protests after the death of George Floyd, hundreds are setting out from DC’s U Street for a march toward the White House.

Protesters continue to clash with Secret Service in front of the White House.

“Every last one of you knows a crooked cop and you do nothing because you’re fucking cowards,” a man yells at the Secret Service. “You’re complicit.” Another protester chimes in: “Fix the broken system.” pic.twitter.com/GOQvqJkOrr

“None of us WANT to be here in the middle of a pandemic,” a protester yells out from the crowd behind me. pic.twitter.com/OW7KBFR96T

According to VOA’s Steve Herman, “the White House is on lockdown, with many reporters stuck inside,” due to demonstrations outside.

A friend just sent this to me, crowds arriving right now to protest outside Barclays Center. pic.twitter.com/lHSb9VFm3e

NYPD protecting the entrance of the Barclays Center earlier today.

The protest goes from peaceful to violent quickly in NYC.

A lot just popped off at the protest for George Floyd at the Barclays Center in Brooklyn. Pepper spray, batons, and several arrests https://t.co/gkdtu4ZUVb pic.twitter.com/HX953IWtPq via @j0ncampbell #NewYork

As night falls, rioters have attacked and overrun the 88th precinct in Brooklyn, resulting in a level 3 mobilization, which requires all special units respond and four cars from every command in the city to location. The 84th precincts is under siege, as well. Also, Brooklyn North.

The situation in the Big Apple is quickly turning from bad to worse, with unconfirmed reports that officers have been shot:

Police vans were lit on fire by the angry mob:

The situation in Brooklyn is critical:

One Twiter user tweets a list of cities where protests have been seen on Friday evening.

In Houston, protesters clash with police.

When the crowd started to clash with officers in Downtown Houston. @FOX26Houston pic.twitter.com/TKcY7Ju54o

One Twitter user says “snipers” are “on buildings” in Houston.

On the West Coast, protests in downtown Los Angeles have begun.

Nationwide protests are likely to get worse through the weekend. It’s only a matter of time before more governors deploy the Nation Guard to restore order. America is quickly descending into chaos.