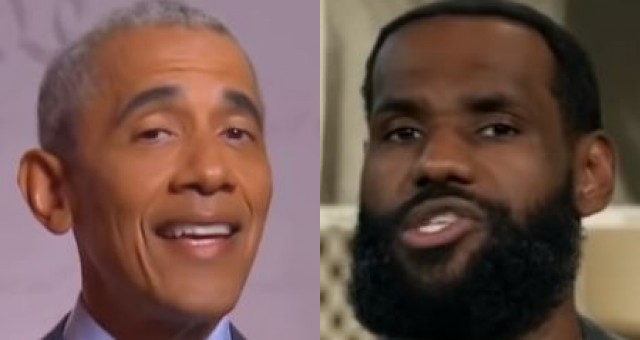 Ex-President Barack Obama involved himself in the deliberations of the NBA players who led last week’s boycott over the Jacob Blake shooting, according to reports.

Obama presided over the conference call when a group of players, including LeBron James and Oklahoma Thunder player Chris Paul, hashed out their demands and statements ahead of last Wednesday’s walkouts, Breitbart reports.

This goes far beyond a protest by the NBA, this is a former President of The United States endorsing racial hate, Black lives Matter and promoting extreme division in our nation.

take our poll – story continues below

Breitbart went on to report, “When asked, he was happy to provide advice on Wednesday night to a small group of NBA players seeking to leverage their immense platforms for good after their brave and inspiring strike in the wake of Jacob Blake’s shooting.

CNN added: “Before NBA players decided to resume playing, National Basketball Players Association President Chris Paul reached out to Barack Obama, a person familiar with the call told CNN, and asked the former President if he would offer his counsel to a group of NBA players. The source also confirmed that Los Angeles Lakers star LeBron James was on the call. It was Paul, the source said, who organized the discussion.”

“As an avid basketball fan, President Obama speaks regularly with players and league officials,” spokesperson Katie Hill told CNN. “When asked, he was happy to provide advice on Wednesday night to a small group of NBA players seeking to leverage their immense platforms for good after their brave and inspiring strike in the wake of Jacob Blake’s shooting.

“They discussed establishing a social justice committee to ensure that the players’ and league’s actions this week led to sustained, meaningful engagement on criminal justice and police reform,” Hill added.

When will America wake up? This has never been about racism or defund the police, this is about destroying the foundations of our nation. The president of Greater New York Black Lives Matter said that if the movement fails to achieve meaningful change during nationwide protests, it will “burn down this system.”

The former President of our nation, Obama, is endorsing such violence and change in our streets. This goes way beyond racial injustice and until our nation wakes up to the truth, we will continue to see the violence and hate escalate in the streets.