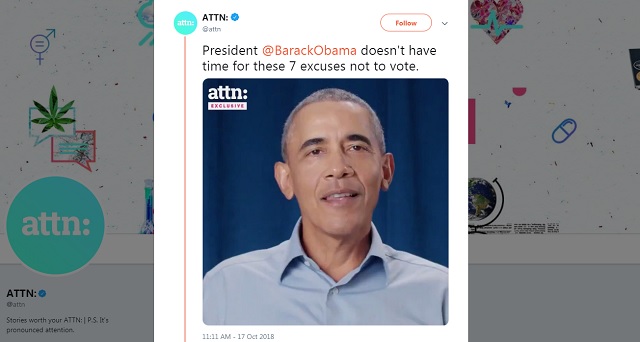 Former President Obama released a video Wednesday saying that being “uninformed” and not “car[ing] about politics” should not be an “excuse” for not voting.

Obama named seven excuses he didn’t want to hear from voters: “I don’t care about politics”; “I can’t relate to the candidates”; “My vote doesn’t matter”; “Midterms are boring”; “I am uninformed”; “I don’t know where I’m supposed to vote”; “I don’t have time to vote.”

Translation: it doesn’t matter if you’re a complete ignoramus who knows nothing about politics, just get out and vote for Democrats.

No one can say he doesn’t know his target market!

President @BarackObama doesn't have time for these 7 excuses not to vote. pic.twitter.com/2Etpm6taTq

Michelle Obama said similar in a speech last month, saying people who “know nothing about nothing” like she did when she was 18 should still vote.

“Don’t be intimidated, don’t let somebody intimidate you from being a part of this process,” Obama said.

Comedian Daniel Tosh, on the other hand, had a slightly different take:

If you’re Republican, you need to make sure everyone you know is voting in this election to keep the movie Idiocracy from becoming our reality.