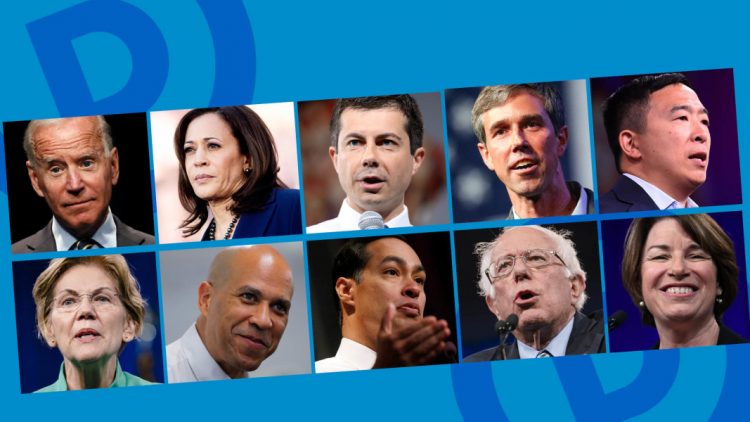 Forbes has a rundown on the net worth of the contenders jostling to be the next establishment teleprompter reader.

The “poorest” candidate is Pete Buttigieg. He’s worth a measly $100,000. He’d be a lot wealthier if he had not ditched a gig at the consulting firm McKinsey to go into Indiana politics back in 2010. He also fell for the student loan usury scam and that has tamped down his wealth. McKinsey is known for helping death merchants gear up for the Second World War.

Tulsi Gabbard, the only candidate to come out against the neocon wars, is worth half a million bucks, apparently by investing in Litecoin and Ethereum, although there is little info on the source of her wealth.

Julian Castro, the former mayor of San Antonio, is worth $700,000. His gig as Obama’s secretary of housing and urban development included a revolving door that deposited him in a cushy position at the University of Texas’ school of public affairs.

Andrew Yang comes in at a cool million bucks. Yang “cofounded Stargiving.com, a website that gave charitable donors the chance to meet celebrities. After it folded he went to work for small mobile software and healthcare companies, then became CEO of test prep business Manhattan Prep in 2006. Yang helped grow the company to $11 million in revenues before industry giant Kaplan bought it in 2009 for tens of millions,” according to Forbes.

Kirsten Gillibrand dropped out. It’s difficult to stand out in an echo chamber crowd of teleprompter reader wannabes preaching identity politics and proposing schemes to steal more money from hardworking Americans. Her Senate job “representing” New York earns her $174,000 a year. Kirsten and her hubby’s “most valuable asset appears to be Gillibrand’s federal pension, worth an estimated $450,000.” She’s said to be worth $1 million.

Marianne Williamson “made millions as a self-help guru and author” and most of her cash is squirreled away “in mutual funds, money market accounts and cash accounts, along with a handful of publicly traded stocks like Apple, Home Depot and VF Corp. While Williamson is not likely to win the election, she’ll almost certainly make money off her campaign: In April, she released her latest book, A Politics of Love,” according to Forbes. She’s worth a cool $1.5 million.

Steve Bullock is the governor of Montana. He owns half the historic buildings in Helena and is worth $1.5 million.

Amy Klobuchar has spent 12 years in the Senate. Her federal pension is worth $560,000 and her net worth is pegged at $2 million.

Bernie Sanders, the socialist anti-capitalist, is worth $2.5 million. As a wealthy socialist, he was able to pay off a 30-year mortgage on a second home in Burlington, Vermont. He made most of his money writing books about evil capitalists.

Beto O’Rourke, the former hippie who liked to play pranks with baby poo, is worth $4 million. He married into the family of an El Paso real estate tycoon. He dropped out after most people figured him for a rank opportunist with mental health issues.

Kamala Harris, the junior United States Senator from California and former San Francisco DA, is worth $6 million. If the salary of her attorney husband is added in, the couple is worth $8.2 million.

Next up, Sleepy Joe Biden. He considers himself middle class even though Joe is worth $9 million. How many middle-class people can afford to pay off a $2.7 million dollar mortgage in less than a year?

Elizabeth Warren has based her campaign on lambasting the one percent (of which she is a member) and proposes stealing a lot of their money. She’s worth $12 million.

Tom Steyer is doomed. He’ll never make it to the White House. He established one of the largest hedge fund operations in the country. Hedge funds, of course, are part of the problem, but Tom suddenly had a change of mind and decided to concentrate on “politics and philanthropy, concentrating his early efforts on protecting the environment”—because, well, the Democrat Green Revolution, a parasitic scheme to steal more of your money and eventually have you living in a mud hut, supposedly resulted in a “change of heart” for Steyer, who is in the upper echelon of the one percent. He’s worth $1.6 billion.

It was obvious from the start of the 2016 campaign the Orange Genius is a billionaire, no surprise there. Plenty of Democrats excoriate him for being a rich white man but say little about the millionaires and billionaires on their side of the street.

Finally, we have the granddaddy of control freaks—who formerly dictated as mayor what New Yorkers can eat and drink—Michael Bloomberg. He has amassed a huge fortune—$53.4 billion—mostly from his “88% stake in financial information [propaganda] company Bloomberg LP, which generates an estimated $10 billion in annual revenue.“ Like Trump, Bloomberg understands how easy it can be to buy your way into the White House. It’s reported he will spend $250 million to do so. If he wins, and he won’t, Bloomberg will come after your Second Amendment and outlaw half the food in your refrigerator.

It’s safe to say these people truly don’t understand the economic plight of the average American in flyover country. In fact, most are responsible as servitors of the state for the destruction of the American economy and the neocon-initiated foreign wars sapping our blood and treasure.

All are apparatchiks for a brutal and parasitical system, including poor Tulsi and the multi-millionaire socialist Bernie. Both, however, are unacceptable to the deep state arrangers of the two-sided crony capitalist system, the demopublican racket designed to enrich our mega-wealthy and largely psychotic overlords.

Kurt Nimmo has blogged on political issues since 2002. In 2008, he worked as lead editor and writer at Infowars, and is currently a content producer for Newsbud. His book Another Day In The Empire is available from Amazon.
(Visited 1 times, 1 visits today)
Share
Tweet
Share
Pin